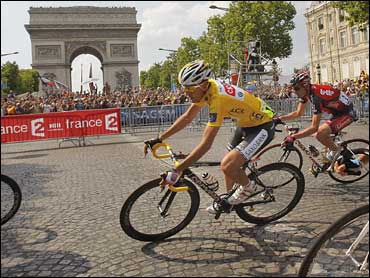 Carlos Sastre won the Tour de France on Sunday after completing the final processional stage into Paris without mishap, becoming the third Spanish rider in a row to win cycling's premier event.

Sastre safely held onto his narrow lead over Cadel Evans of Australia, finishing seven seconds behind his main rival for a 58-second victory. Bernhard Kohl of Austria finished 1:13 back overall in third - the second tightest podium finish in the 105-year-old race.

The 21st and final stage was won by Gert Steegmans of Belgium, who won a final sprint out of the pack at the end of the 88.9-mile trek from Etampes to the Champs-ElysDees.

The ride Sunday was largely ceremonial for Sastre, who all but locked up victory a day earlier in the final time trial by holding off Evans. The Spaniard overtook the yellow jersey by winning the toughest Alpine ride this year - stage 17 into the famed Alpe d'Huez - and held onto to it to the finish.

As the peloton headed toward Paris, Sastre cruised alongside a CSC car and sipped from a flute of champagne that was handed to him by team owner Bjarne Riis.

Sastre crossed arms and butted helmets affectionately with CSC teammate Stuart O'Grady as they crossed the finish line, before being surrounded by his family after getting off his bike.

The 33-year-old Spanish rider is among the oldest men to have won the Tour for a first time, and the seventh Spaniard to win. It's also his sixth top-10 finish in the race.

As in the last two years, this year's 95th Tour edition was plagued by doping. Three riders were ousted in drug busts: Riccardo Ricco of Italy, and Spanish riders Manuel Beltran and Moises Duenas Nevado.