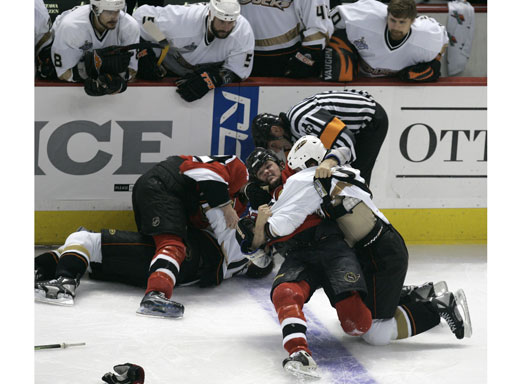 The Soyuz rocket blasted off from the space center on the remote central Asian steppes of Kazakhstan under sunny, blue skies, and disappeared into the heavens, trailing a red flame and leaving a faint contrail.

The spaceship carrying Tito, a 61-year-old California businessman, was scheduled to dock with the ISS on Monday.

A television monitor inside the spaceship showed Tito, in a white spacesuit decorated with an American flag on the shoulder and a plexiglass helmet, grinning broadly.

A ground controller asked in Russian-accented English, "How do you feel, Dennis?"

"Khorosho," he replied in Russian — "Great."

"We are glad to have lived to see this exciting moment," a Russian Aerospace Agency chief told the crew just before they entered the spaceship early Saturday, according to the ITAR-Tass news agency.
"The stars have been favorable to us," he said.

The launch came as U.S. and Russian space officials resolved disagreement about a potential traffic jam in space.

NASA, which has vehemently opposed Tito's trip, has warned of a potential traffic jam in space if its Endeavor space shuttle remains docked at the International Space Station because of technical delays.

NASA wanted Endeavour to remain docked at the space station for an extra two days — until Monday — while astronauts tried to fix problems with key computers. The space agency pressed Russia to delay the launch, but had to settle for assurances that the capsule would not arrive at the station until the shuttle was gone.

Russian space officials refused to hold the launch, but agreed to put the Soyuz in a holding pattern if the shuttle was still at the space station on Monday.

Because of progress made in orbit Friday, NASA was hopeful the shuttle could leave Sunday — but only if the computer trouble is resolved quickly. The Soyuz TM-32 spaceship could orbit for up to four days if necessary before docking, the Interfax news agency reported, citing Russian Aerospace Agency spokesman Sergei Gorbunov.

NASA wants Edeavour gone by the time the Soyuz pulls up because the Russian craft would come within 20 feet of Endeavour — too close for comfort given the potential for radio interference and thruster contamination, and the near-catastrophic Mir collision four years ago.

Russian space officials refused to delay Saturday's launch but agreed to put the Soyuz in a holding pattern if the shuttle was still at the space station on Monday.

Three control-and-command computers began failing in the Destiny laboratory on Tuesday night. Only one was back on line Friday as flight controllers worked with the space station astronauts to revive one of the disabled machines and replace the other.

NASA hopes to have at least one more computer operating by Saturday, so the astronauts can crank up the space station's newly installed 58-foot robot arm and get rid of the packing crate clenched in its hand.

NASA has said repeatedly that the partly built ISS is no place for amateurs, complaining that Tito was not equipped to deal with many dangers of space travel and that his presence might be a distraction for the orbiter's crew.

But Tito's fare is a huge sum for Russia's cash-starved space program, amounting to more than one-sixth of its annual budget and enough to cover the entire cost of Saturday's flight.

Russian space officials told NASA that they are a full partner in the ISS and have the right to send whomever they wish on their quota of flights. They also point out that Tito will not be the first civilian in space — just the first tourist.

From Russia's perspective, it's not just about space-tourist hucksterism. Russia hopes to replace the ISS' escape craft, whose service lifetime expires at the end of the month, this weekend as well.

For his part, the space tourist was pretty excited leading up to the launch.

"Right now I feel better than I've ever felt in my entire life," he said.

Tito said he had no apprehensions about the dangers of space flight — something he dreamed about since the Sputnik was launched in 1957.

"When you thought about something for 40 years, you visualize it in your mind," he said. "So this is a dream come true."

From behind a glass screen to protect the crew from infection on the eve of the flight, Tito blew kisses at his girlfriend Dawn Abraham, who came to Baikonur, Kazakstan, to watch the launch.

Many of those gathered to witness Tito's flight said they were puzzled by NASA's objections.

"I mean what can you say when your dad tells you that he wants to go into space? It's incredible. It's fantastic. And both the Russians and the Americans need people like my dad who are ready to help commercialize space," said Tito's son Brad.