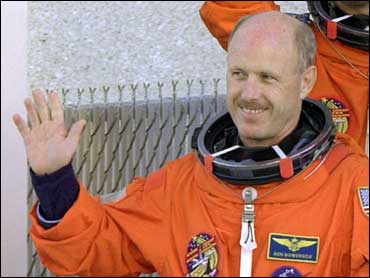 The three men living on the international space station said Tuesday they've wept for their friends who died aboard Columbia but are now trying to move forward.

In their first public comments on the shuttle disaster, the three crew members also said their emotions seem to be amplified in orbit because of the sense of solitude.

"When you're up here this long, you can't just bottle up your emotions and cope with it all the time," said the commander of the space station, American astronaut Kenneth Bowersox.

"It's important for us to acknowledge that the people on (Columbia) were our friends, that we had a connection with them and that we feel their loss," he said. "Each of us had a chance to shed some tears, but now it's time to move forward, and we're doing that slowly."

Bowersox said he and his crew, American Donald Pettit and Russian Nikolai Budarin, listened in on last Tuesday's memorial at Johnson Space Center with President Bush. After the ceremony, Bowersox said they rang the ship's bell seven times in tribute to their fallen friends.

The three have been in orbit since November and were supposed to return to Earth next month aboard a space shuttle. But all shuttle flights are on indefinite hold because of the Columbia disaster Feb. 1, which killed seven astronauts.

All three said that they were prepared to remain in orbit as long as necessary, even up to a year. The space station is equipped with a three-man lifeboat at all times, and NASA is considering having them return in it, if their replacements arrive via another Russian Soyuz spacecraft.

Bowersox said NASA has been "real good" about giving them some time off to grieve. Treadmill workouts have helped, he added.

"One of the things we noticed that really helps is exercise," Bowersox said. "It's incredible how it seems to sort of even out your nervous system and just put you in a better mood no matter what's going on around you on board."

Bowersox said he and his two crewmates have been kept up to date on the investigation.

"I guess the key question is the same question that all of you had is what happened?" Bowersox said. "Once we know what happened, I'd start digging into why it happened. What in the system failed? Did we miss something? Did we just not know something? Was there an incorrect analysis?"

The head of the Columbia investigation expressed confidence Tuesday the panel will solve the mystery, as he and other members climbed into a pair of shuttle simulators to get a sense of what astronauts go through when they re-enter Earth's atmosphere.

"The professional team I have here has solved accidents with less evidence," retired Navy Adm. Harold Gehman Jr. said. "There's a lot of data and more data coming. We haven't even started debris analysis yet."

Gehman spoke in advance of the first news conference by the entire nine-member board.

Five of the men on the board, appointed by NASA within hours of Columbia's fiery breakup Feb. 1, are active or retired military. Another is the director of the Federal Aviation Administration's accident investigation office, Steven Wallace. Only one works for NASA, Scott Hubbard, director of Ames Research Center in Mountain View, Calif.

The evidence released so far suggests Columbia's troubles began in the left wing. That is where a chunk of foam insulation struck 81 seconds after liftoff on Jan. 16, and that is where temperatures started surging and sensors began failing in the final eight minutes of flight.

Part of the left wing has been found.

The tests should produce "data to sink our teeth into," Hubbard said.