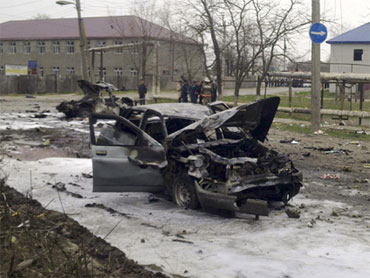 Two suicide bombers - including one impersonating a police officer - killed 12 people Wednesday in southern Russia. Prime Minister Vladimir Putin said the blasts may have been organized by the same militants who attacked the Moscow subway.

The powerful former president had previously vowed to "drag out of the sewer" the terrorists behind the attacks in Moscow, which killed 39 people and injured scores of commuters during Monday's rush hour.

Wednesday's blasts struck in the province of Dagestan. Bombings and other attacks occur almost daily in Dagestan, Chechnya and Ingushetia, provinces in Russia's North Caucasus region where government forces are struggling against a separatist Islamist insurgency.

"I don't rule out that this is one and the same gang," Putin said at a televised Cabinet meeting.

President Dmitry Medvedev said later the attacks were "links of the same chain."

In Wednesday's attacks, a suicide bomber detonated explosives in the town of Kizlyar near Dagestan's border with Chechnya, when police tried to stop the bomber's car, Interior Minister Rashid Nurgaliyev said in televised comments.

"Traffic police followed the car and almost caught up - at that time the blast hit," Nurgaliyev said. He said the deadly cargo was headed for the center of Kizlyar.

As investigators and residents gathered at the scene of the blast, a second bomber wearing a police uniform approached and set off explosives, killing the town's police chief among others, Nurgaliyev said.

CBS News' Svetlana Berdnikova reports the explosions occurred about 300 yards from buildings belonging to the Russian Interior Ministry, the Federal Security Service (FSB), which is the nation's feared top intelligence agency and the descendant of the KGB, and a school.

Nine police were among the dead from both blasts, and at least 23 other people were injured, authorities said. The nearby school and police station were also damaged.

Grainy cell phone video footage posted on the life.ru news portal showed the moment of the second blast, with officials wandering past a destroyed building before a loud clap rings out and smoke rises in the distance. Television pictures later showed a few gutted cars, damaged buildings and a roughly six-foot-deep crater in the road.

Police and security services are a frequent target because they represent the Kremlin - the militants' ideological enemy - but also because of their heavy-handed tactics. Police have been accused of involvement in many killings, kidnappings and beatings in the North Caucasus, further alienating residents.

A report by the Center for Strategic and International Studies said 916 people died in the North Caucasus in 2009 in violence related to the clashes, up from 586 in 2008. Another monitoring group, the Caucasian Knot, reported the region suffered 172 terrorist attacks last year, killing 280 people in Chechnya, 319 in Ingushetia and 263 in Dagestan.

In January in Makhachkala, Dagestan's capital, a suicide bomber blew up an explosives-packed car at a police station, killing six officers. In August, 24 died and more than 200 were injured when a man crashed a bomb-laden van into the police station in Nazran, Ingushetia.

The bloodshed has continued despite Kremlin efforts to stem it. Medvedev, who claims the militants have spread through the North Caucasus "like a cancerous tumor," this year appointed a deputy prime minister to oversee the troubled region and address the root causes of terrorism, including dire poverty and corruption.

Rebels from the North Caucasus were accused of masterminding the Moscow attack, but no claims of responsibility have been made. Speculation has been rife that the attacks were retaliation for the recent police killings of high-profile militants in the North Caucasus.

According to analysts with the Washington area-based group IntelCenter, the group most likely behind Monday's blasts was the Caucasus Emirate, which had recently "demonstrated capability to conduct this type of attack and expressed intent."

(CBS)
IntelCenter said the group, headed by Doku Umarov, released statements in late 2009 and February of this year warning Russians that, "This war will reach the homes of each of you. It has already reached your homes. And trains that explode today are only the beginning. Planes will be blown up at your end, and war will be unleashed on your streets."

A profile of Umarov on the BBC's Web site says the powerful Chechen warlord has been accused by Russia's security forces of being behind the 2004 school siege in Beslan, which resulted in more than 300 deaths.

Berdnikova reports that, in a new audio message released earlier Wednesday, a man purporting to be Umarov accuses the FSB of organizing the subway attacks. The tape was broadcast by a television network in neighboring Georgia - which has also seen frequent armed border disputes with its mammoth neighbor to the north.

The Moscow subway bombings, carried out by two women, were the first terrorist attacks in the Russian capital since 2004, and the first suicide attacks in six years.

Monday's violence shocked a country that had grown accustomed to having such violence confined to its restive southern corner. Those attacks followed a warning from an Islamic militant leader that the militants would bring their struggle to the heart of Russia.

The first blast struck the Lubyanka station in central Moscow, beneath the headquarters of the Federal Security Service or FSB, the KGB's main successor agency. The FSB is a symbol of power under Putin, a former KGB officer who headed the agency before his election as president in 2000.

About 45 minutes later, a second blast hit the Park Kultury station on the same subway line, which is near the renowned Gorky Park. In both cases, the bombs were detonated as the trains pulled into the stations and the doors were opening.