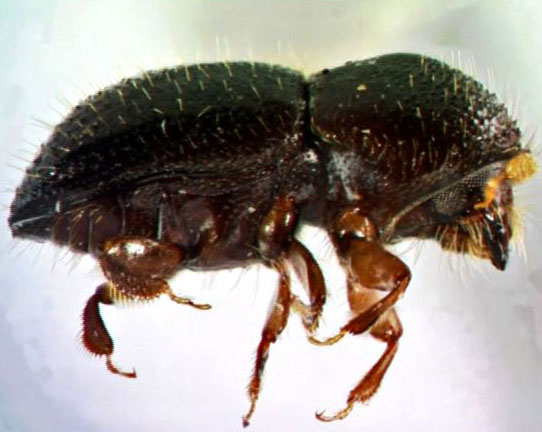 Southern California is already plagued by a crippling drought and wildfires.

Now you can add a legion of seemingly unstoppable beetles to the list of threats facing the region's forests.

They've already invaded hundreds of tree species, and they are showing no signs of slowing down.

"We have lost numerous trees," said Jim Folsom, director of the Huntington Botanical Gardens outside of Pasadena, Calif.

"On the property, in these 200 acres, we have over 700 species of large tree, woody tree. Of those, fully one-third, over 200 different kinds, different species of tree have proven to be invaded or impacted by this borer," Folsom said.

The polyphagous shot hole borer is a tiny, grain-sized beetle first discovered in the area two years ago.

It drills a hole into the heart of the tree and deposits a fungus that it carries in its mouth. That blocks water and nutrients and in many cases kills the tree.

"We have no known treatment," Folsom said. "We have no capacity to fend it off."

They have since spread to 280 different species in Southern California, and he fears they could be unstoppable.

"The main problem is this is an invasive, exotic beetle, which means we don't have any established, natural enemies that could keep this population down in Southern California," said Eskalen.

Eskalen and his colleagues tracked the bug to southeast Asia but are still unsure how it got to the U.S.

While the infestation is a concern at Huntington Gardens, it has the potential to create a nationwide crisis as the beetles spread into residential neighborhoods, tinder-dry forestland and, most worrisome, agricultural plants.

"If we cannot stop it, it can go as far as the beetle and fungus can survive," Eskalen said.