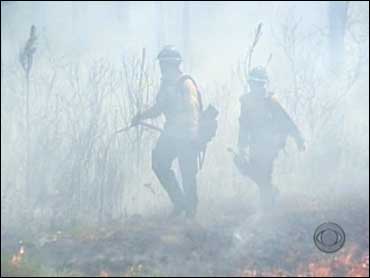 There are hundreds of firefighters from all over the country in the region, federal, state and local, reports CBS News correspondent Hari Sreenivasan, all trying to get a handle on this blaze. But again Tuesday, they have their hands full with strong winds, low humidity and warm temperatures.

Firefighters pushed the flames back to the containment line, but dry weather and 15 mph wind in north Florida was expected to further hinder their work.

"If we can just get through today," said Russell Hubright, a U.S. Forest Service spokesman.

Between 250 and 500 homes west of U.S. 441 had to be evacuated for a second time when the fire line was breached, Florida Highway Patrol Lt. Michael Burroughs said. An additional 570 people who were ordered out of homes east of the roadway were still waiting to return.

The wildfire had raced through the Okefenokee Swamp in southeast Georgia and into northern Florida after being started by lightning more than a week ago. By Tuesday, it had burned 109,000 acres in Florida and 139,813 acres of swampland in Georgia — nearly 390 square miles in all.

Flames jumped a containment line at the fire's western edge, but firefighters used bulldozers and water-dropping helicopters to extinguish them, said John Speaks, deputy incident commander with the forest service. The fire was about 1½ miles from U.S. 441.

On the western edge of the Okefenokee Swamp in Georgia, Fargo residents were told to stay alert as wind forecast at up to 20 mph pushed the blaze against fire breaks plowed between the swamp and the city of 380 people.

"Everybody's being told not to let their guard down, don't unpack," said Laura Polant, a fire information officer in Fargo. "Residents are still being told to be prepared to leave, because the call can come at any time."

In Florida, the blaze was 50 percent contained Tuesday. The smoke had lifted enough to open Interstates 10 and 75 to traffic, but drivers were warned that periodic closures were still possible.

Another large wildfire, in northeastern Minnesota and Ontario, could be brought under control by the end of the week, officials said. No one has been seriously hurt in the fire, which has burned 117 square miles of Minnesota and Canada, but many cabins and smaller structures — more than 100 in all — have been destroyed.