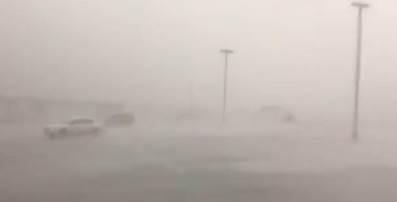 Severe storms have blown down trees, caused airport delays and knocked out power to tens of thousands in North and South Carolina. At least one death was attributed to the storm, according to the Guilford County, North Carolina Emergency Management.

The airport in Charlotte, North Carolina, said on Twitter Sunday that severe weather caused a ground stop and forced air traffic controllers to leave their tower. The ground stop was later lifted.

The National Weather Service says a reported tornado was sighted near Greensboro, North Carolina, and the high winds damaged at least seven homes and destroyed one mobile classroom.

Elsewhere, authorities in Lexington County, South Carolina, posted photos online of a house that had been damaged, while the weather service received a report of the roof being blown off an agricultural building in the county.