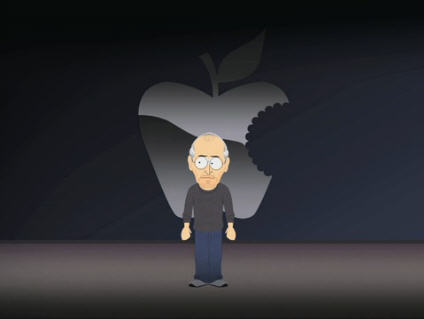 (CBS) Wednesday night's season premiere of "South Park" combined one of the world's most-coveted tech gadgets with one of the most gag-inducing movies in recent memory.

No, seriously - they literally combined the iPad and "The Human Centipede": Three humans, one digestive tract and one iPad.

On the show, Steve Jobs' latest project is to surgically connect three people into a "HUMANCENTiPAD" (the episode's title), with their waste fueling the device. Kyle unknowingly agrees to be part of the experiment when he agrees to Apple's Terms of Service without reading it first.

The night's other storyline featured Cartman, who wanted an iPad of his own. When his mother wouldn't buy one, he unleashed a stream of colorful euphemisms to complain that she was being unfair - but also implied that she was molesting him. South Park's adults took his language literally, which leads to an appearance on Dr. Phil and him being the first recipient of Apple's new iPad/"Human Centipede" hybrid.

You can watch the full episode here.

Tell us: What did you think of last night's episode?