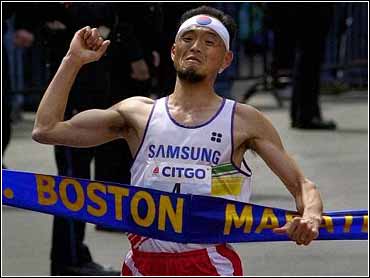 Lee Bong-ju’s victory run ended a 10-year winning streak by Kenya; he is the first Korean to win the race since 1950.

Lee Bong-ju of South Korea won the Boston Marathon on Monday, snapping a 10-year victory streak for Kenya. Catherine Ndereba won the women's race for the second consecutive year, making sure the Kenyans were not shut out.

Lee raised his fist to salute the crowd as he finished the 26.2-mile course in 2 hours, 9 minutes, 43 seconds. Silvio Guerra of Ecuador was second, 24 seconds behind, and Kenya's Joshua Chelang'a came in third, 46 seconds behind the winner.

Italy's Gelindo Bordin in 1990 was the last non-Kenyan to win the men's race. The last Korean to win was Kee Yong-ham in 1950.

Ndereba finished almost three minutes ahead of Poland's Malgorzata Sobanska. Lyubov Morgunova of Russia was 36 seconds back, in third.

A field of 15,606 runners and 47 wheelchair racers left the Hopkinton starting line at noon in the 105th Boston Marathon. A half-million spectators were expected along the route to Boston's Copley Square, where a laurel wreath and a prize of $80,000 awaited the fastest.

The field, the third largest in the event's history, included the last three men's champions and the winners of the last four women's races. The weather was cloudy, with temperatures in the low 50s — good weather conditions for a marathon.

Greg Meyer was the last American winner, in 1983.

By JIMMY GOLEN
© MMI The Associated Press. All Rights Reserved. This material may not be published, broadcast, rewritten, or redistributed