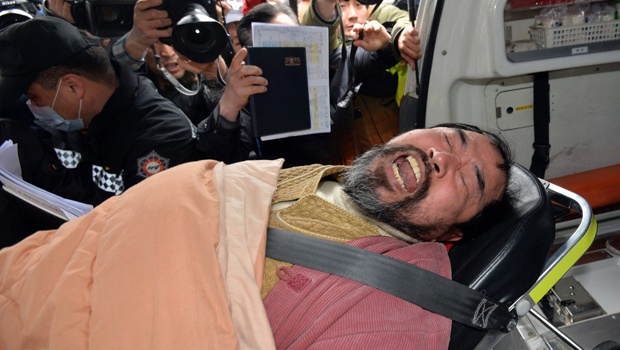 SEOUL, South Korea -- The man named as the assailant in a knife attack that injured the U.S. ambassador to South Korea was well-known among police and activists as one of a hard-core group of protesters willing to use violence to highlight their causes.

Purported U.S. interference in Korean affairs appeared to be the main grievance of Kim Ki-jong, 55, who has a long history of anti-U.S. protests.

"South and North Korea should be reunified," Kim shouted as he slashed Ambassador Mark Lippert with a 10-inch knife, police and witnesses said.

Thursday's knife attack is the latest act of political violence in a deeply divided country where some protesters portray their causes as matters of life and death.

The slashing of Lippert's face and arm, which left deep gashes and damaged tendons and nerves, was an extreme example, but America infuriates some leftist South Koreans because of its role in Korea's turbulent modern history.

The State Department said it could not speculate on a motive at this time, and that South Korean President Park Geun-hye had called Lippert in the hospital to express her condolences.

Kim told police that he attacked Lippert to protest U.S.-South Korean military drills that started Monday - exercises that the North has long maintained are preparations for an invasion. Kim said the drills, which Seoul and Washington say are purely defensive, ruined efforts for reconciliation between the two Koreas, officials at Seoul's Jongno police station said in a televised briefing.

In a photo posted to his blog, Kim was seen protesting those same drills outside the U.S. Embassy last week, CBS News correspondent Margaret Brennan reports.

The attack was not Kim's first on a diplomat. He was reportedly in prison for two years in 2010 for throwing a piece of concrete at the Japanese ambassador in Seoul, Brennan reports.

Washington, which backed the South during the 1950-53 Korean War against the communist North, still stations nearly 30,000 troops here and holds annual military drills with Seoul. That's something anti-U.S. activists view as a major obstacle to their goal of an eventual reunification of the rival Koreas.

The attack left a gash on Lippert's face that started under his cheekbone and extended diagonally across his cheek toward his jawbone. He received 80 stitches to close the 4-inch wound, Chung Nam-sik of Severance Hospital told reporters. Lippert, 42, also had surgery on his arm to repair damage to tendons and nerves and was in stable condition at the hospital.

About nine hours after the attack, Lippert posted on his Twitter account that he was "doing well and in great spirits" and would be back "ASAP" to advance the U.S.-South Korean alliance.

U.S. Secretary of State John Kerry, in Saudi Arabia for meetings with regional leaders, said the attack would not reduce America's resolve in pursuing its interests.

"The United States of America will never be intimidated or deterred by threats or by anybody who harms any American diplomats," he said.

North Korea's state-controlled media later crowed that Kim's "knife slashes of justice" were "a deserved punishment on war maniac U.S." and reflected the South Korean people's protests against the U.S. for driving the Korean Peninsula to the brink of war because of the joint military drills.

Police didn't consider the possibility that Kim, who has ties to the Korean Council for Reconciliation and Cooperation, which hosted the breakfast meeting where Lippert was attacked, would show up for the event, according to a Seoul police official who didn't want to be named, citing office rules.

U.S. ambassadors have security details, but their size largely depends on the threat level of the post. Seoul is not considered to be a particularly high threat post despite its proximity to the North Korean border. It's not clear how many guards Lippert had, but they would have been fewer than the ambassadors in most of the Mideast.

Seoul's Foreign Ministry said it was the first time a foreign ambassador stationed in modern South Korea had been injured in a violent attack.

South Korea's Unification Ministry says Kim visited North Korea with a civic group eight times between 2006 and 2007, during a period of inter-Korean cooperation under a liberal government in Seoul.

In a Facebook posting, Yoon Meehyang, who heads an activist group representing South Korean women forced to serve as wartime sex slaves for Japanese troops, said Kim was a consistent trouble-maker at the group's rallies several years ago. Yoon and other activists expressed worries that the attack on Lippert would harm the public image of peaceful leftist protesters, or prompt the conservative government to suppress their activities.

Small to medium-sized demonstrations regularly occur across Seoul, and most are peaceful.

But scuffles with police do break out occasionally, and the burning of effigies of North Korean and Japanese leaders is also common. Some demonstrators have also previously severed their own fingers, thrown bodily fluids at embassies and tried to self-immolate.

Lippert became ambassador last October and has been a regular presence on social media and in speeches and presentations during his time in Seoul. His wife gave birth here and the couple gave their son a Korean middle name.

He will need treatment at the hospital for the next three or four days and may experience sensory problems in his left hand for several months, said Chung, the hospital official.