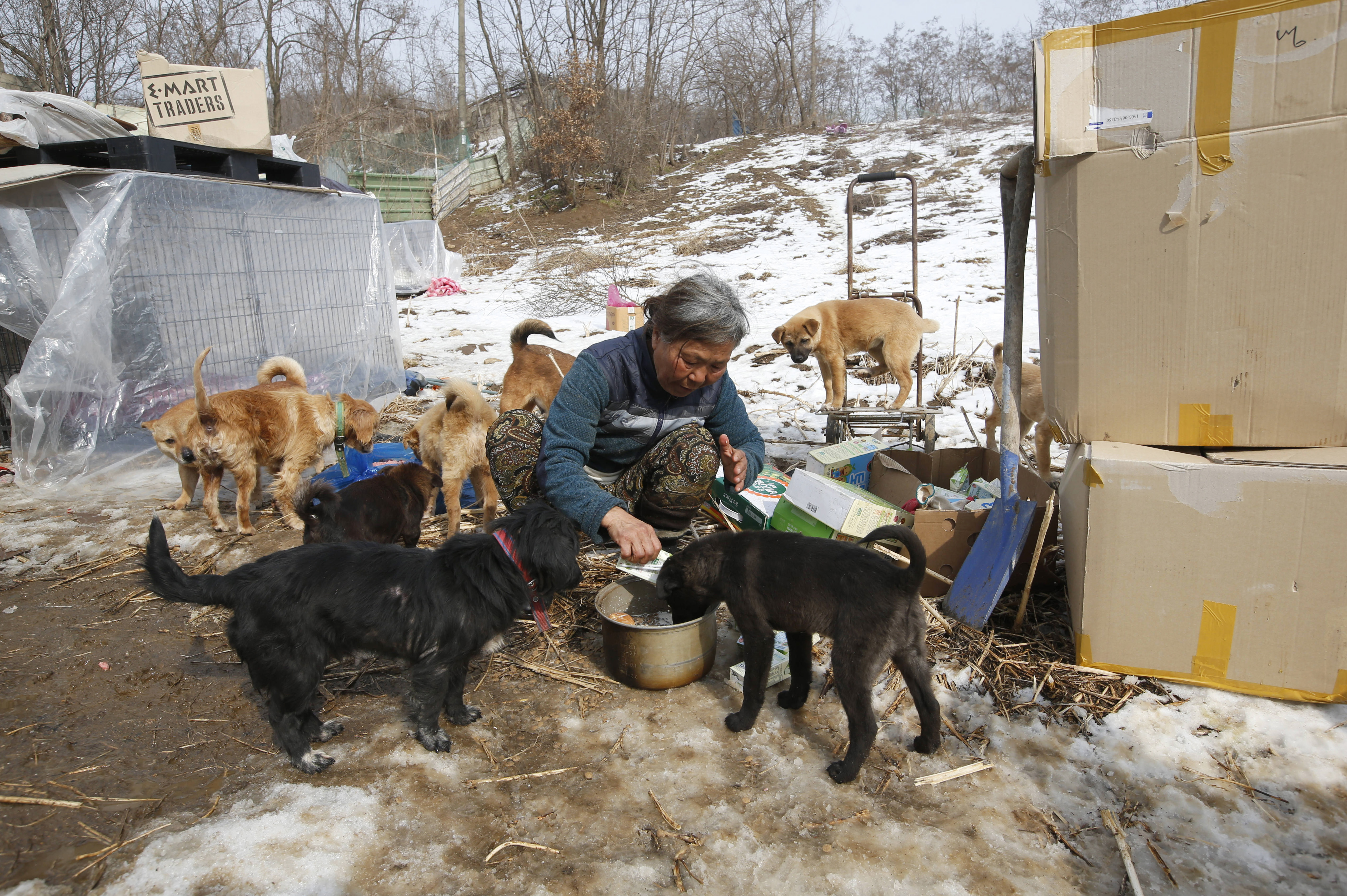 ASAN, South Korea -- Puppies bark and wag their tails as they follow a gray-haired woman through a hillside compound that shelters more than 200 dogs.

"Hey, my babies. Give your mom a kiss," says Jung Myoung Sook, 61. She lowers her face and one puppy near a snow-covered kennel licks her lips; another gently paws her cheek.

In South Korea, where dogs are considered a traditional delicacy and have only recently become popular as pets, Jung's love for her canine friends is viewed by some as odd. But others see her as a champion of animal rights.

Rescuing and caring for dogs for 26 years, Jung has moved seven times because of neighbors' complaints about noise. She often stops to pick up dogs roaming the streets, and has bought others in danger of being sold to dog meat farms or restaurants.

Some question whether someone as poor as Jung, who ekes out a living cleaning a store and collecting recyclable boxes, can feed and care for so many dogs. While Jung's dogs looked healthy and well-fed during a recent visit by The Associated Press, their condition couldn't be independently confirmed.

Authorities in the central city of Asan know about Jung's current shelter, which she opened in 2014, but have no legal responsibility to inspect it, according to an official who refused to give his name because he wasn't authorized to speak to media on the matter.

Pets are growing in popularity here, where one in five households has a cat or dog, but activists say public attitudes toward pets lag those in the West.

Supporters of Jung see her as a heroine, saving stray or lost dogs from being killed for food or euthanized at public shelters if not adopted or found by their owners. About 81,000 stray or abandoned animals, mostly dogs and cats, were sent to public shelters in 2014, down from 100,000 in 2010, the government said.

"My babies aren't hungry. They can play and live freely here," said Jung, whose clothes are worn and hair is disheveled. "Some people talk about me, saying, 'Why is that beggar-like middle-aged woman smiling all the time,' but I just focus on feeding my babies. I'm happy and healthy."

Dozens of other South Koreans are believed to be raising large numbers of dogs, sometimes in unsanitary conditions where diseases spread easily. Jung says her dogs are mostly healthy, although some die in fights with each other.

Most of the dogs live with her for good. She said she spends about $1,600 a month on food and medicine, and otherwise relies on donations of soybean milk, pork, dog food and canned meat. Family, friends and sometimes strangers send her money.

"She lives only for her dogs," he said, "without doing much for herself."