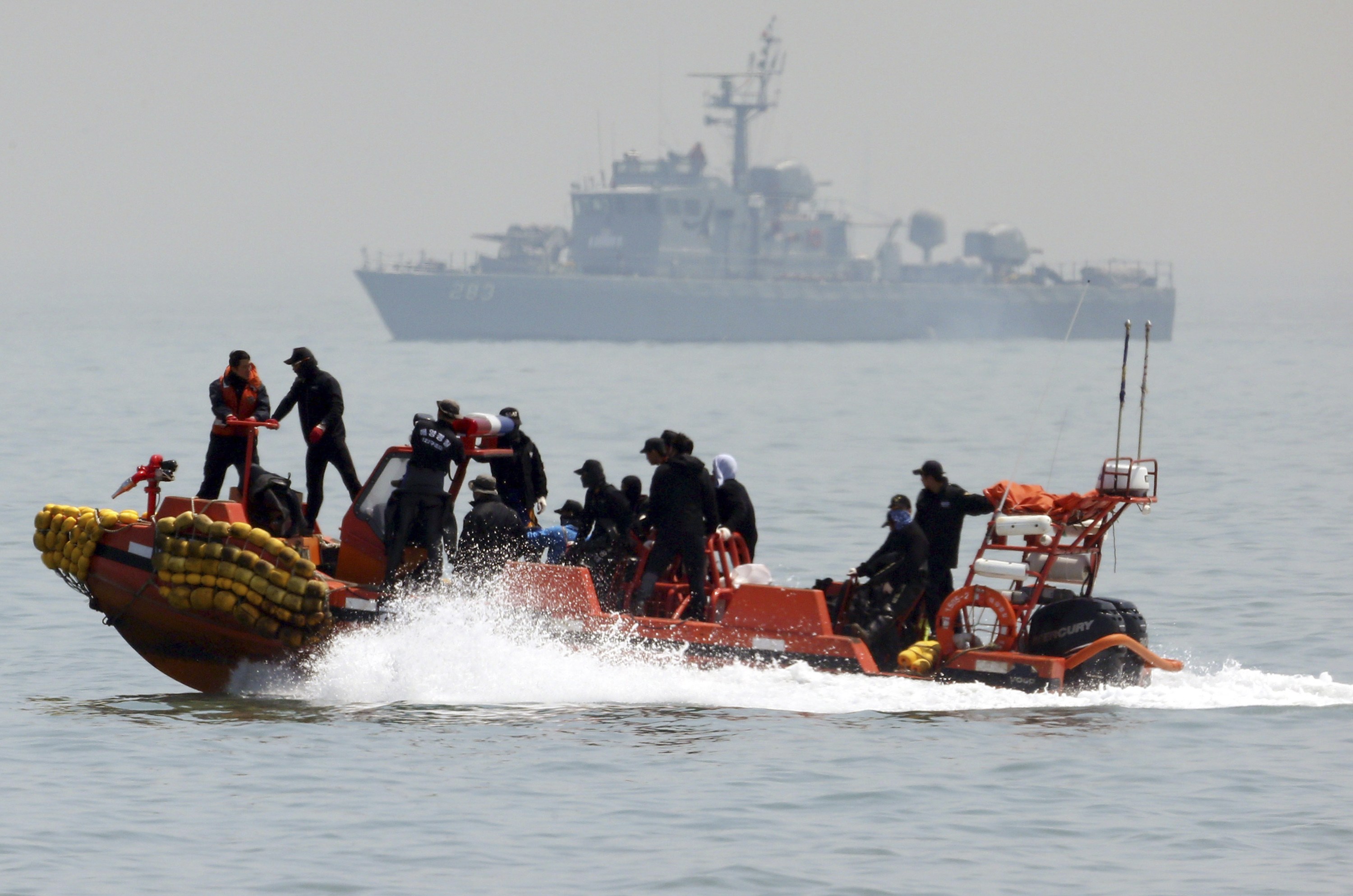 Looming in the background is a sensitive issue: When to bring in the cranes and begin the salvage effort by cutting up and raising the submerged vessel. The government has warned that the work might eliminate air pockets that could be sustaining survivors, but for some relatives that is a long-lost hope.

"Now we think we have to deal with this realistically," said Pyun Yong-gi, whose 17-year-old daughter is among the missing.

"We don't want the bodies to decay further, so we want them to pull out the bodies as quickly as they can," Pyun said on Jindo island, where recovered bodies are taken for families to identify.

That view is not shared among all relatives of the missing, however. One of them, Jang Jong-ryul, was sensitive about the mere mention of the word "salvage" and said most families don't want to think about it.

The victims are overwhelmingly students of a single high school in Ansan, near Seoul. More than three-quarters of the 323 students are dead or missing, while nearly two-thirds of the other 153 people on board the ferry Sewol when it sank one week ago survived.

More
Even with about 150 people still missing, the funeral halls in Ansan are already full, Oh Sang-yoon of the government-wide emergency task force center said in a statement. He said the center "is taking measures to accommodate additional bodies by placing mortuary refrigerators at the funeral halls in Ansan," and directing mourning families to funeral homes in nearby cities.

On Jindo island, where bodies recovered from the ferry are taken, descriptions of the dead are read over a loudspeaker. Relatives rush over to the main notice board and peered at details added by an official.

Some relatives cry out and run from the tent. Others stand red-eyed and shell-shocked.

The number of corpses recovered has risen sharply since the weekend, when divers battling strong currents and low visibility were finally able to enter the submerged vessel. But task force spokesman Koh Myung-seok the work is becoming more difficult, and divers must now break through cabin walls to retrieve more bodies.

"The lounge is one big open space, so once in it we got our search done straight away. But in the case of the cabins, we will have to break down the walls in between because they are all compartments," Koh said.

Twenty-two of the 29 members of the ferry's crew survived, and 11 have been arrested or detained in connection with the investigation. Two were arrested Wednesday, senior prosecutor Ang Sang-don said.

The captain, Lee Joon-seok, and two crew members were arrested Saturday on suspicion of negligence and abandoning people in need.

A maritime professor who spoke with the third mate who was steering the ferry before it sank said he suspects a problem with the steering gear caused the sinking.

Professor Kim Woo-Sook of Mokpo National Maritime University is a former teacher of the third mate, Park Han-gyeol. She was arrested Saturday in connection with the accident, which left 300 people dead or missing.

Kim talked to Park at a Mokpo detention facility. He says she told him she ordered a helmsman to make a 5-degree turn, but the steering gear turned too far and the helmsman could not turn it back. Tracking data show that the ship made a 45-degree turn.

Prosecutors are examining the turn as try to determine the disaster's cause.

On Tuesday, four crew members were arrested and another two were detained without arrest warrants.

The four crew members arrested Tuesday talked to reporters after a court hearing, their faces hidden with caps, hooded sweatshirts and masks.

One said they tried to correct the ferry's listing early on but "various devices, such as the balance weight, didn't work. So we reported the distress situation, according to the captain's judgment, and tried to launch the lifeboats, but the ferry was too tilted and we couldn't reach."

The captain has said he waited to issue an evacuation order because the current was strong, the water was cold and passengers could have drifted away before help arrived. But maritime experts said he could have ordered passengers to the deck - where they would have had a greater chance of survival - without telling them to abandon ship.

Koh, of the task force, said bodies have mostly been found on the third and fourth floors of the ferry, where many passengers seemed to have gathered. Many students were housed in cabins on the fourth floor, near the stern of the ship, Koh said.

The cause of the disaster is not yet known. Senior prosecutor Ahn Sang-don said investigators are considering factors including wind, ocean currents, freight, modifications made to the ship and the fact that it turned just before it began listing. He said authorities will conduct a simulation and get experts' opinions.

The Ministry of Ocean and Fisheries had released incomplete data on the turn last week because a central station did not receive all the signals the Sewol's on-board transponder had sent. It released more complete details on Tuesday with data received by another station, and those show that the ferry spent about three minutes making a roughly 180-degree turn shortly before it began to list.

It remains unclear why the ship turned around. The third mate, who was arrested Saturday, was steering at the time of the accident in a challenging area where she had not steered before, and the captain said he was not on the bridge at the time.

Shareholders of the Sewol's owner, Chonghaejin Marine Co. Ltd., apologized in a statement that was distributed to reporters outside the office in Incheon, saying they feel "infinite sadness and responsibility."

"We will humbly accept all responsibility for this accident and we will not hesitate to do anything to console the pain of victims and grieving families even a little bit," said the statement from Yu Dae-kyun, Yu Hyuk-gi and others who are de facto owners of Chonghaejin. The company's president had apologized earlier.

In Ansan, a temporary memorial for the victims opened at Olympic Museum, a couple of blocks from Danwon High School, which the students attended.