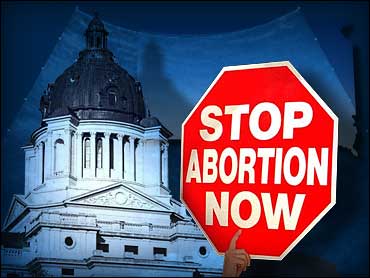 Voters will have the final say on a tough new law that bans almost all abortions in South Dakota.

Secretary of State Chris Nelson said Monday that the law's opponents had collected enough signatures to put a question on the November ballot asking voters if the law should go into effect as planned or be dumped.

The state's abortion law, among the strictest in the nation, bans the procedure in all cases except when necessary to save a woman's life, with no exceptions for rape or incest.

Supporters hoped it would prompt a court challenge that would give the U.S. Supreme Court an opportunity to overturn its 1973 Roe. v. Wade decision that legalized abortion. But instead, opponents, who argue the law is too extreme, gathered enough petition signatures to put the question directly to voters.

A coalition of groups opposed to the law needed 16,728 signatures by Monday to put the measure on the ballot. Voters will be asked to decide whether to accept or reject the measure.

The Legislature passed the measure and the governor signed it in March. It was scheduled to take effect July 1 but is now on hold pending the outcome of the public vote.