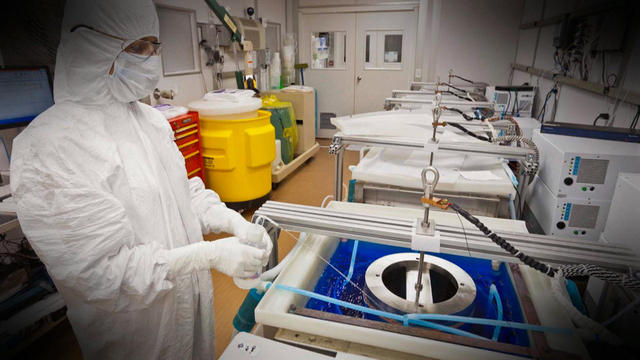 Small towns built around a single industry run the risk of having to reinvent themselves if the employer closes up shop. That's what happened in the small South Dakota city of Lead. Nestled in the state's Black Hills, Lead was once home to the largest gold mine in North America.

When the mine closed in 2002, the town took a big hit. Hundreds of workers lost their jobs, and many left in search of work.

Lead was a company town without a company. But then some very smart people realized there was something perhaps more valuable than gold sitting underneath the homes and streets, reports CBS News correspondent Jim Axelrod.

"Well this, this is what you can see from the mining activity for 130 years," Mayor Ron Everett said of the gaping hole at the edge of town. "There's 300 miles of underground workings down there."

For years, the Homestake Gold Mine was the largest and deepest gold mine in North America, producing over 40 million ounces of gold. At its peak, it employed 2,200 people and supported a vibrant community with virtually no unemployment.

"Lead was the economic engine of South Dakota. These were the highest paid salaries in South Dakota. We drove all of the economy and the local area," said city commissioner David Vardiman, who used to work as a geologist at Homestake.

Gold was booming 44 years ago when CBS News last visited the mine in Lead. But after years of increasing production costs and declining prices, the mine shut down 15 years ago. Hundreds of people lost their jobs.

Luke Scott was one of them. "It was pretty hard to process," he said. "It was tough. Because then you gotta try to find another job, you know? But there isn't a lot of jobs for miners in this area."

Without the mine, Lead could've taken a dive. But it avoided that fate by taking a dive – nearly a mile below the surface.

After suiting up in protective clothes, boots and a hard hat, Axelrod crowded into an elevator-like cage and descended 4,850 feet below the surface. Along for the ride were Vardiman and Scott, who both got new jobs at the site.

The Sanford Underground Research Facility is so far under the earth that all the radiation and noise from the sun is filtered out – creating a place where researchers can work in an ultra-pure environment.

"I'm just fortunate that I get to come back here and do what I like to do and I like to be underground," Scott said.

There, a new kind of mining is taking place. In the deepest clean room in the world there is a team of world-class scientists like Cabot-Ann Christofferson who are mining for the secrets of the universe. There you have to wear special sterile suits and gloves on top of gloves.

Christofferson, a chemist, grows the world's purest copper to use in experiments that wrestle with the most fundamental questions of humanity.

"Of why matter exists in the universe. If, at the time of the Big Bang, you had equal amounts of matter and anti-matter, they should've met and annihilated each other so why are we here?" Christofferson said.

Rather than shrinking, Lead is now growing – all on account of some masterful repurposing.

Over the next decade, a new billion-dollar international physics project will be built half a mile away from Christofferson's lab in another part of the old Homestake mine. And another influx of scientists and visitors will be expected in Lead, still trying to fill empty storefronts and revive its economy.

Scientists knew Homestake would be perfect for this kind of research because half a century ago a chemist named Ray Davis convinced the mine owners to let him build a small lab underground. The work he did there later won him a Nobel Prize.