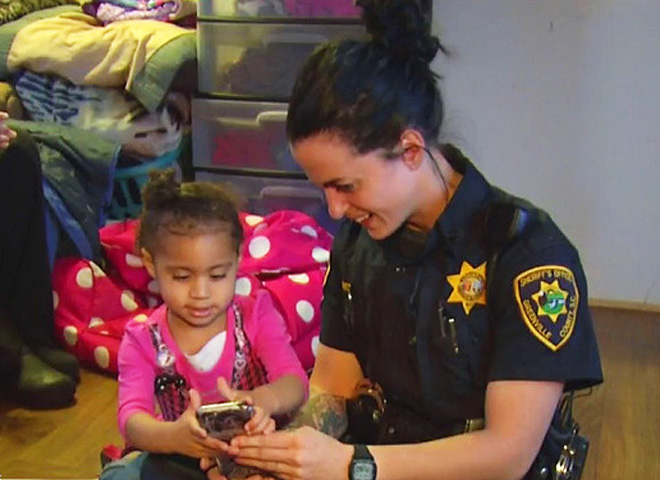 GREENVILLE COUNTY, S.C. --A Greenville County Deputy who went to investigate a 911 made by a toddler, was met with an unexpected emergency when she arrived, CBS affiliate WSPA reports.

Aliyah, 2, was facing a fashion emergency and required immediate assistance - putting on her pants.

"Dispatch actually gave us a call and they said it sounded like a baby on the phone and it was basically a 911 hang up call," said Deputy Martha Lohnes. "The door opened up and she comes running out to the front with half a pant leg on and she's just like, 'Hey!'"

Lohnes, who said she's gotten practice with two sisters of her own, was happy to lend a hand.

"I just ended up sitting down on the stairs helping her put on the rest of her pants and then it was almost like a reward, she just wanted a hug," she explained.

Needless to say, when the toddler's mother, Pebbles Ryan, got the call at work, she was more than a little surprised.

"I came home to 'Oh, the police helped your daughter put pants on.' I was like 'Oh! Okay." Then she wouldn't let any of the police leave because she wanted hugs," Ryan said.

Aliyah's mother said she's no stranger to cell phones and that the two have talked about calling 911 for help in the past.

"We've pointed out the numbers but it completely surprised me that she actually did it," said Ryan.

"I thought it was awesome that at 2 years old, she knew to call 911 at all," added Lohnes.

Aliyah now also has a new, easier to put on, pair of jeans, in addition to a new friend Deputy Lohnes.

They say they respond to every one, not matter what. While they train for every outcome, they added that you can't teach the passion and charisma that Deputy Lohnes displayed.

It stands to reason that not too many of those calls end in hugs, either.