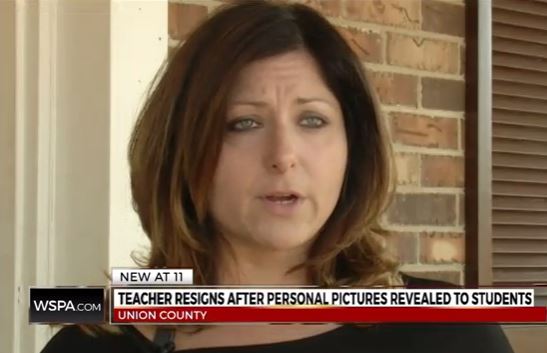 UNION COUNTY, S.C. - A South Carolina teacher at Union County High School says the nude pictures of herself sent around the school that forced her to resign were not her fault.

Leigh Anne Arthur, a 13-year teaching veteran, told CBS affiliate WSPA in Spartanburg a student got a hold of the photos when she was out of the classroom.

"He opened up my gallery for my pictures and he found inappropriate pictures of myself and he took pictures from his cell phone of that and then he told the whole class that he would send them to whoever wanted them," Arthur said.

Regardless of the origin of the photos, Arthur said the school district asked her to resign, and the student has not been expelled.

"The student who actually took my phone and took pictures turned around and told me your day of reckoning is coming," said Arthur.

Superintendent David Eubanks told WSPA the school was concerned that Arthur could be contributing to the delinquency of a minor.

Arther said she plans on pressing charges against the student next week, but has no hard feelings.

She said she would like to tell him: "I hope that you have a wife one day that you treat like gold and you won't want this to ever happen to her."

The teacher claimed there's a parent and student petition making the rounds asking her to teach again.