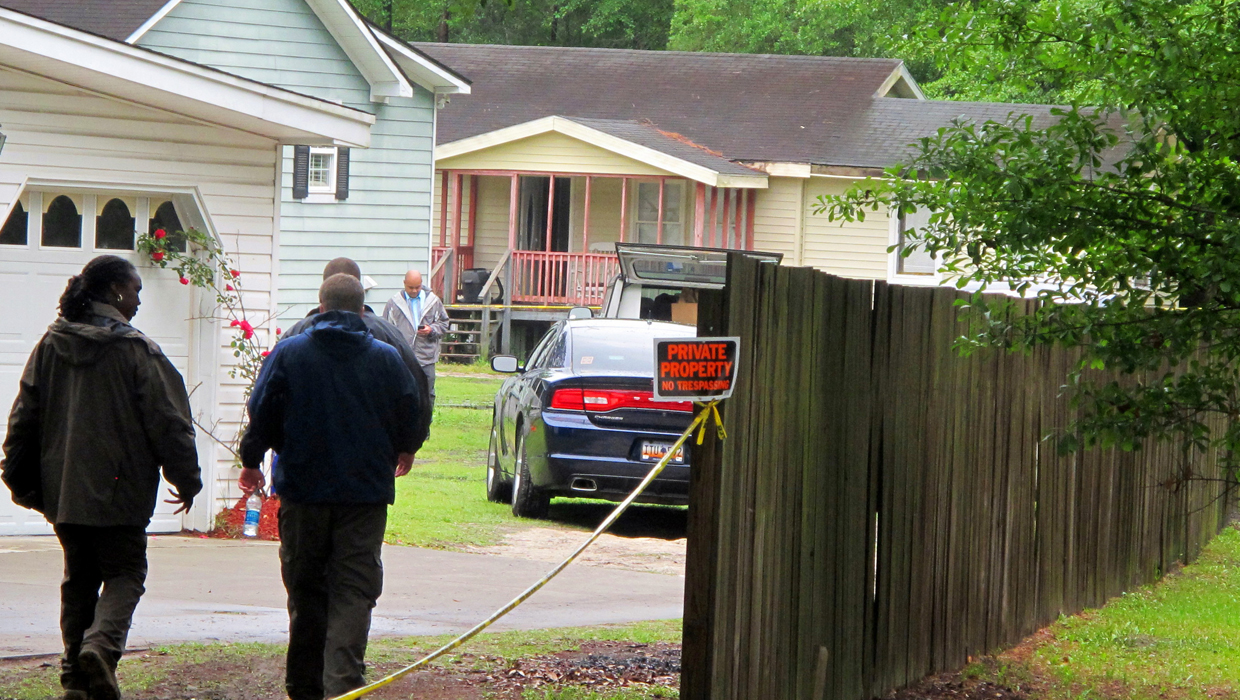 HOLLYWOOD, S.C. -- As a South Carolina sheriff's deputy responded to a report of a home invasion, he shouted commands at a black man holding a gun before firing at the man and wounding him in the neck, according to an incident report released Friday.

Officials also released Friday a recorded statement the wounded man gave to an investigator, acknowledging that he should have dropped the gun.

The Charleston County Sheriff's Office report summarizes the incident involving Deputy Keith Tyner, who is white, and another deputy on Thursday in the rural community of Hollywood, in a subdivision of mobile homes and brick ranch homes.

When deputies arrived at the mobile home down a dirt driveway they saw a gunshot hole in a front window and the back door appeared to be damaged, the incident report says.

The man, later identified as Bryan Heyward, came out of the back door with a gun and the officer told him to drop it, Sheriff's Maj. Eric Watson said.

"As we were approaching, the back door swung open," said the report written by Deputy Richard Powell, who responded to the scene with Tyner. Powell said he could not see into the house from his vantage point.

The deputy wrote that he "heard Deputy Tyner shout verbal commands and that there was a gun" and "next heard gunfire as Deputy Tyner fired to suppress the threat."

As Heyward was being rushed to the hospital, he told an investigator in a recorded interview that he should have dropped the gun that he had grabbed earlier to protect himself from intruders.

The recording was played Friday during a meeting between Charleston County Sheriff's officials and about a half dozen community leaders. News reporters also attended.

Heyward was taken to the Medical University of South Carolina with life threatening injuries, Watson said. A hospital spokesman said Friday he had no information to report on anyone with that name.

In the ambulance, Heyward told police he had exchanged gunfire with two suspects who fled the home on bicycles, authorities said.

Later Thursday police arrested Thomas Zachary Brown, 22 and charged him with first-degree burglary and attempted murder in connection with the home invasion. Watson said he did not believe Brown sustained any injuries.

The State Law Enforcement Division is investigating the shooting and the sheriff's office will investigate the home invasion, Watson said. The two deputies involved in the incident have been suspended with pay.

It was the second shooting in recent months involving law enforcement in Charleston County.

On April 4, a white North Charleston Police officer shot and killed a black man who he said fought with him over the officer's stun gun.

Officer Michael Slager has been charged with murder in the slaying of Walter Scott. A bystander's cellphone video showed him firing eight shots at Scott's back as he ran away.

Both shootings come amid nationwide calls for police reform following several high-profile deaths of black men at the hands of law enforcement. Most recently, the city of Baltimore erupted in riots last month after a black man died of a spinal injury he received while in police custody.

Hollywood is about 15 miles west of Charleston.