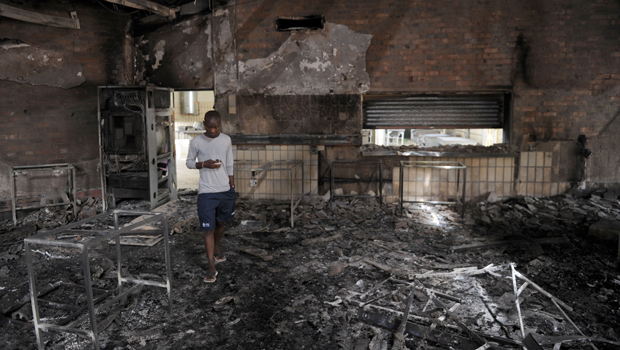 Watching these images, you would be forgiven for thinking you had stumbled onto a retrospective film of apartheid-era South Africa in the 1980s.

But it is 2016, and this is the state of South African universities -- 22 years after the birth of the nation's democracy.

South Africa's premier tertiary institution, the University of Cape Town (UCT), has been wracked by violence since the campus opened its doors for the new academic year in February.

Students erected a tin shack on campus grounds to serve as a powerful symbolic protest against the lack of student accommodation. There are 27,000 students enrolled at UCT, and there is only accommodation for 6,000 of them.

Black students from impoverished backgrounds are hardest hit by the shortcomings. If they don't get into a university residence, they're usually unable to afford the high price of living off campus in Cape Town. The city is the country's most expensive: a tourist magnet with an exquisite coastline studded with opulent homes and sprawling villas.

Campus security guards tore down the shack on the orders of the university administration. Some students retaliated by burning colonial and apartheid-era art adorning the institution's hallowed walls.

The Wits University in South Africa's economic hub of Johannesburg has seen similar protests. Controversy mounted as the university's vice chancellor brought private security guards onto campus -- ostensibly to protect students who he claimed were being intimidated by protesters.

An online student newspaper, the Daily Vox, questioned the wisdom of the move.

"The introduction of private security onto Wits' campus, from the beginning of the registration period in 2016, has been terrifying: uniformed men with bulletproof vests and riot gear (shields, clubs and fencing) patrol the corridors, and have established checkpoints for surveillance and exclusion," said the paper's staff.

The student reporters behind the article argue that what escapes the university's vice chancellor "is that the most obvious thing to do is not to invite police onto campus in the first place and to seek more meaningful approaches and forms of engagement around the underlying issues that have given rise to this situation in the first place."

But the issue is complicated. Vice Chancellor Adam Habib is not a relic of apartheid South Africa, but himself a child of the anti-apartheid movement who cut his teeth during South Africa's township violence.

The university in South Africa's Free State, once a bastion of apartheid and right wing movements, is also grappling with complex issues.

The campus has seen racially charged clashes, with videos going viral of white students beating up black students after they disrupted a student rugby match in what they said was a bid to get the attention of that university's vice chancellor.

Student anger was fuelled by what black activists at the University of the Free State (UFS) said was a pattern of repeated disregard for their concerns.

The week ended the way it began, with violence escalating even further after students at the North West University in Potchefstroom torched an administration building, library and computer lab.

In recent days, black and white students have even come to blows over the use of Afrikaans (regarded as the language of the apartheid oppressor) on some universities as a teaching language -- an echo of the 1976 student uprising in the Soweto township south of Johannesburg against apartheid.

South African president Jacob Zuma has condemned the violence, saying "no amount of anger should drive students to burn their own university and deny themselves and others education."

The issues may differ from one campus to the next, but there is an underlying theme: post-apartheid South Africa has not lived up to its promises.

If you are poor and black it is still extremely difficult to get a good education in this country, let alone dream of going to a tertiary institution.

Race remains the country's fault line, and the protests and violence erupting around the country reflect, in many ways, a deep anger bubbling under the surface in many parts of civil society in South Africa.

After 22 years of democracy, there are some who believe things have not changed significantly.

It is "a culmination of continued suppression of black students and black pain," one student told a local media outlet. "To be honest with you, it was really a matter of survival."