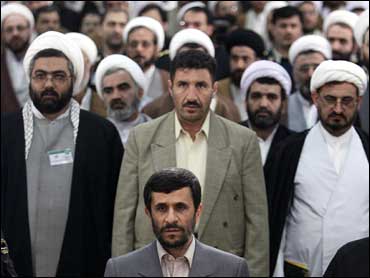 South Africa called Monday for a 90-day "time out" on sanctions against Iran and said a resolution drafted by six world powers should drop an embargo on arms exports and financial sanctions targeting Iran's Revolutionary Guards and an Iranian bank.

The proposals by South Africa, which holds the presidency of the U.N. Security Council this month, were obtained by The Associated Press ahead of an informal council meeting Tuesday and the first formal discussion Wednesday on the draft resolution.

Germany and the five veto-wielding permanent council nations — the United States, Russia, China, Britain and France — agreed on modest new sanctions Thursday to step up pressure on Iran to suspend uranium enrichment, which can be used to produce nuclear energy or nuclear weapons. But South Africa and the nine other non-permanent council members were not part of the negotiations and only received the draft Thursday to consider and propose changes.

"Iran's request to be heard at the Security Council debate appeals to nations which would prefer to negotiate a solution and which are sensitive to Tehran's right to develop peaceful nuclear energy, particularly South Africa, regardless of Iranian President Mahmound Ahmadinejad's defiance of the Council's December deadline," said CBS News foreign affairs analyst Pamela Falk from the U.N. "And since South Africa controls the agenda for March, it will have some influence on the inclusion of its request for a delay."

The extensive amendments to the draft proposed by South African could delay a vote on the resolution, though with support from the five permanent members the draft is almost certain to be adopted.

France's U.N. Ambassador Jean-Marc de La Sabliere said the South African amendments were not consistent with the approach of the six powers. "It weakened a lot the resolution, and we thing that pressure should be put on Iran," he said.

In its paper on "required amendments to the new draft," South Africa backed a proposal made late January by U.N. nuclear chief Mohamed ElBaradei at the World Economic Forum in Davos for a 90-day "simultaneous time out" as a way to defuse tensions.

Under ElBaradei's suggestion, Iran would suspend its enrichment activities and the Security Council would put on hold implementing sanctions so both sides could "go to the negotiating table" in hopes of achieving a comprehensive settlement not only covering nuclear issues but security, economic and political concerns as well.

The South African paper said "the 90 day period of grace provided to Iran would allow for a de-escalation of tensions and create an opportunity for Iran and the other parties involved to resume negotiations towards a long-term peaceful solution."

"This short period would be sufficient to make progress with political negotiations but would be insignificant in terms of the further advancement of Iran's enrichment program," the paper said.

The proposed new sanctions in the draft resolution would ban Iranian arms exports and freeze the assets of 28 additional individuals and organizations involved in the country's nuclear and missile programs, about a third linked to Iran's Revolutionary Guard, an elite military corps.

The package also calls for voluntary restrictions on travel by the individuals subject to sanctions, on arms sales to Iran, and on new financial assistance or loans to the Iranian government.

The South African paper said "the resolution should focus only on Iran's nuclear program" and proposed amendments that would drop the ban on Iranian arms exports and voluntary calls on all countries "to exercise vigilance and restraint" in supplying arms to Tehran. A call on all countries and institutions "not to enter into new commitments for grants, financial assistance and concessional loans" to the Iranian government would also be dropped.

For the same reasons, the South Africans proposed amendments that would eliminate all seven members of Iran's Revolutionary Guard and three organizations affiliated with the elite military corps from the list of those subject to an asset freeze and travel "vigilance." The Revolutionary Guard oversees vital Iranian interests, including oil and natural gas installations and the nation's missile arsenal.

The South African proposal would also eliminate Bank Sepah and Bank Sepah International, and the bank's chairman, Ahmad Derakhandeh, from the list of those subject to an asset freeze.

South Africa stressed that the resolution should "only provide for proportional, incremental and reversible measures directed towards the nuclear program that would support a peaceful and negotiated solution to the outstanding questions related to Iran's nuclear program."

"Sanctions should never be adopted in haste when other tracks for the peaceful resolution of a situation should be addressed," the paper said.

South Africa's U.N. Ambassador Dumisani Kumalo, who refused to comment on the specifics of the proposal except to say that it was following ElBaradei's suggestion, said the country wants to stress the importance of political negotiations.

"South Africa is not a window dressing in this council," he said when asked about the extensive amendments. "We have started engaging with" the permanent members.

"It's just ideas we're proposing," Kumalo said. "If they don't work, I have to go back to my capital and say they didn't work, but they're not take it or leave it."