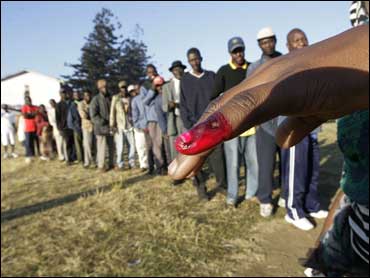 South Africa deported some 450 Zimbabweans overnight from a border detention center to a homeland beset by political violence and uncertainty, an international aid group said Saturday.

Medecins Sans Frontieres said one of its teams visited the center on Friday - the day a widely criticized presidential runoff was held in Zimbabwe - and found more than 450 men, women and children there saying they had crossed the border in recent days, "fleeing instability and political violence."

When the aid team returned Saturday with supplies, it found the center empty the agency said in a statement. It said South African authorities had confirmed all the Zimbabweans were sent back.

"Hundreds of people have been sent back into the country from which they fled, without any recognition of their right to seek asylum," said Rachel Cohen, head of Medecins Sans Frontieres in South Africa. She said the deportations were "unacceptable" and "in violation of international as well as South African law, which guarantee the right to seek asylum."

Siobhan McCarthy, a spokeswoman for the Ministry of Home Affairs, told The Associated Press on Saturday that foreigners caught at the border are screened to determine their status.

"I don't know the particulars of this case, my assumption would be that they would be in the country illegally and do not qualify for refugee status and therefore were returned to Zimbabwe," McCarthy said.

As many as 3 million Zimbabweans are in South Africa. Some have been here for years, and many come and go regularly. Some work in South Africa for weeks or months between visits home, while others come on day trips to buy goods scarce in their economically ravaged country.

South Africa views most Zimbabweans crossing its border as economic migrants, not refugees. Few apply for asylum, in part because that could make it difficult to return.

"Everybody who comes into the country is allowed to seek asylum, but the majority of the people crossing the border from Zimbabwe into South Africa, they do not qualify for refugee status and it is on that basis that many of the applications for asylum have been turned down," McCarthy said.

But she said South Africa was reviewing its policy of sending economic migrants home, mindful that powerful forces spur Zimbabweans and others to come to the region's economic hub.

"The minister has said that these deportations are a fruitless exercise because people are entering the country faster than we can deport them, and by the time we deport some they just find their way back into the country again."

Zimbabweans were targeted in recent xenophobic attacks by South Africans who claim foreigners are stealing jobs and using scarce resources.

Human Rights Watch said this month that the high number of Zimbabweans in South Africa underlines a "failure of foreign policy."

South African President Thabo Mbeki's attempts to mediate between Zimbabwean President Robert Mugabe and the Zimbabwean opposition are increasingly seen as failed. Mbeki has refused to publicly criticize Mugabe, who is accused of trampling human rights and ruining the economy of what had been the region's breadbasket.

In Zimbabwe on Friday, people said they were forced to vote in a presidential runoff in which Mugabe was the only candidate. The opposition candidate had withdrawn, citing an onslaught of state-sponsored attacks on his supporters.

Mugabe was expected to claim victory. Opposition candidate Morgan Tsvangirai won the first round but, according to the official results, not enough votes to avoid a runoff.

Friday's election was widely condemned by African and other world leaders as a sham that would only intensify Zimbabwe's political crisis and further delay attempts to address its economic collapse.