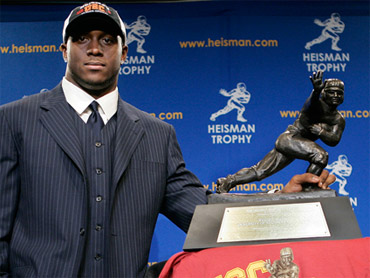 (CBS/AP) It appears that Reggie Bush might become the first football player ever to be stripped of the Heisman Trophy.

Sources tell Yahoo! Sports that the Heisman Trust is expected to revoke college football's top honor from the former USC star by the end of the month. The news comes two months after the NCAA found major violations in the Trojans' football program during Bush's Heisman-winning 2005 season.

Sources said the trust will strip Bush of his award and leave the honor for that season vacant. It would be the first time the trophy has been revoked in the award's 75-year history, Yahoo! Sports reports.

In June, the NCAA leveled the university with stinging penalties, issuing a two-year bowl ban and declaring Bush ineligible dating back to the Trojans' 2004 national championship.