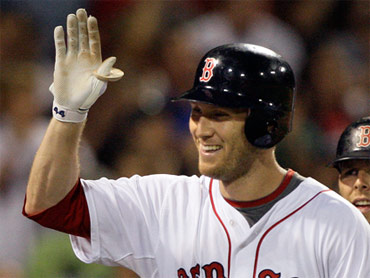 A person familiar with the negotiations told The Associated Press on Tuesday that the sides have a preliminary agreement. The person spoke on condition of anonymity because Bay must pass a physical for the contract to be complete.

The three-time All-Star is expected to sign a four-year contract for about $65 million. The 31-year-old outfielder hit 36 home runs with 119 RBIs last season for Boston.

Bay is a career .280 hitter and has averaged 30 homers and 99 RBIs in his last six seasons.

Bay fills a huge hole in left field for the Mets, who skidded to a 70-92 mark during an injury-plagued year and were looking for a bopper.

The deal was first reported by WFAN.

Bay produced in his 1½ seasons with the Red Sox, but the sides couldn't agree on a new deal. That started a Baywatch that ended with the Mets landing a top free agent - a bat they needed for their decimated lineup, and the kind of splashy move their fans demanded general manager Omar Minaya make.

Bay and left fielder Matt Holliday were the biggest hitters on the market. Holliday, who split last season in Oakland and St. Louis, is seeking an even richer deal than Bay.

Picked by many to be a playoff contender last season, the Mets never got into the race during their first season at Citi Field. Despite the addition of record-setting closer Francisco Rodriguez, New York couldn't overcome injuries to the likes of Jose Reyes, Carlos Beltran and Carlos Delgado. By the end of the year, the Mets were fielding makeshift lineups on a daily basis.

The vast left field at the new ballpark turned into a revolving door, with eight players starting at least seven games there. Gary Sheffield, Cory Sullivan and Daniel Murphy spent the most time at the spot.

Pressure on the Mets to boost their roster heightened even more this winter when their city rivals, the World Series champion Yankees, traded for All-Star center fielder Curtis Granderson and pitcher Javier Vazquez and signed free agent Nick Johnson.

The Mets recently signed free agent pitcher Kelvim Escobar, who's been beset by injuries, and added backup catcher Henry Blanco. But finding a major player was their priority and they hope Bay, a star since becoming the 2004 NL Rookie of the Year, will put them on the right track.