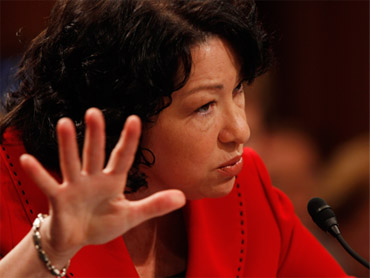 Supreme Court nominee Sonia Sotomayor on the second day of her confirmation hearings explained the well-publicized "wise Latina" comments she has made in the past.

"I would hope that a wise Latina woman with the richness of her experiences would more often than not reach a better conclusion than a white male who hasn't lived that life," Sotomayor said in a speech at 2001 at the University of California, Berkeley, law school. She made similar statements at other such events.

She said the context of her words created a misunderstanding.

"I want to state upfront, unequivocally and without doubt: I do not believe that any ethnic, racial or gender group has an advantage in sound judging," she said. "I do believe every person has an equal opportunity to be a good and wise judge, regardless of their background or life experience."

During questioning from Republican Sen. Jon Kyl, Sotomayor admitted it was a poor choice of words.

"The words I chose, taking the rhetorical flourish, it was a bad idea," she said. "I do understand that there are some who have read this differently, and I understand why they might have concern."

As a former lawyer, Kyl said he understood why Sotomayor might have raised this point with the students she was talking to. However, Kyl said he took issue with the fact that Sotomayor did not also talk much about the need for those future judges to set their prejudices aside.

"The fault I have with your speech is... you don't say that that's what you need this information for," he said. "You say, if there are enough of us, we will make a difference, inferring that it is a good thing if we begin deciding cases differently."

Indeed, Sen. Jeff Sessions, R-Ala., the senior Republican on the committee, also questioned whether Sotomayor believes judges can put aside their personal views.

"We're not robots... who don't have feelings," Sotomayor said. "We have to recognize those feelings and put them aside. That's our job. I think the system is strengthened when judges don't assume they're impartial."

Sessions questioned previous statements Sotomayor has made, including another comment given in her 2001 Berkeley speech: "I wonder whether achieving that goal (of impartiality) is possible in all or even in most cases," she said in that speech.

"Aren't you saying you expect your heritage and background to influence your decision making?" Sessions asked.

"Life experiences do influence us in good ways," Sotomayor said in response. "That's why we seek the enrichment of our legal system from life experiences, but that's not what drives a result. The impartiality is an understanding that the law is what drives the result... I wasn't encouraging the belief that I thought that (life experiences) should drive the result."

Sotomayor said that her record shows she has never let her personal views inappropriately impact her decisions as a judge. She said, however, that life experiences enable people to understand some facts better than others -- which is why appellate courts have more than one judge.

Republican Sen. Orrin Hatch questioned the reasoning behind her decision in the New Haven firefighters case, which was overturned by the Supreme Court. In that case, the city of New Have, Conn. threw out the results of a test given to firefighters to qualify for promotions. Very few minorities did well on the test. Sotomayor was part of a three-judge panel that ruled in favor of the city.

"Your decision... has become very controversial," Hatch said. "People are tired of the courts imposing their will against one group or another without justifiication."

Sotomayor said the case was not about quotas or affirmative action but about the test in question.

"This was a challenge to a test that everybody agreed had a very wide difference between the pass rate of a variety of different groups," she said. "The city (of New Haven) was faced with the possibility, recognized in law, that the employees who were disparately impacted...could bring a suit."

Sotomayor said the city's actions were permissible under established law -- while the Supreme Court applied a new standard.

The Supreme Court "announced it was applying a standard from a different theory of law and explained how to look at this question in the future," she said.

The senators queried Sotomayor on a number of other subjects ranging from her opinion on cameras in the courtroom, the case Bush v. Gore and the limits of executive power.

Sotomayor would not give her opinion on whether or not the Supreme Court should have weighed in on Bush v. Gore, or their decision. She said, however, that the fact that the case prompted many states to make changes to their electoral law made the case "a tribute to the greatness of our American system."

"Whether you agree or disagree with the Supreme Court decision, all of the branches become involved" in improving the system, she said.

Democratic Sen. Dianne Feinstein asked the judge whether the Constitution permits the president to use "signing statements" to "disregard" portions of legislation passed by the Congress.

Sotomayor said it was a "broad question" she had to be "very cautious in answering." She cited previous judicial opinions that say the president's actions should be judged in the context of what Congress has or has not done. If Congress has expressly authorized a president to act in a certain way, "then he is acting at his highest stature of power," she said. He is working at his lowest ebb of power when acting in prohibition of an act of Congress. It is murkiest in areas on which the Congress has not spoken, Sotomayor said.

She concluded by saying the bottom line is that "the president can't act in violation of the Constitution. No one's above the law."

Sotomayor was also hesitant to answer questions from Republican Sen. Lindsey Graham about whether a person who is found to be a member of an enemy force must eventually be returned to battle or released. Sotomayor said she has not practiced military law, though she has read Supreme Court rulings based on that law.

Sotomayor has shown caution throughout the proceedings so far, according to Cohen. She has taken care to answer questions from Republicans more thoroughly than the questions from Demcrats, Cohen said.

The confirmation hearings, which began with opening statements Monday, resumed today with question-and-answer rounds that are expected to stretch over two days and possibly into a third.

Democrats and Republicans alike spoke glowingly Monday about the 55-year-old appeals court judge's rise from public housing in the Bronx to her nomination to be the first Hispanic and only the third woman on the Supreme Court.

"I would hope every American is proud that a Hispanic woman has been nominated to sit on the Supreme Court," said Sen. Jon Kyl, R-Ariz.

Former U.S. Attorney General Alberto Gonzales, himself a former Texas State Supreme Court judge, said a good justice is "sensitive" to his or her biases.

"That should be the reality in every case, not an aspiration," Gonzales CBS' "The Early Show" Tuesday.

But the GOP made clear, despite the Democrats' Senate majority that makes her confirmation likely, it will not let Sotomayor's hearings pass without raising questions about her impartiality. By extension, Republicans also are attacking President Barack Obama for what they see as a double standard in calling for her quick confirmation after voting against President George W. Bush's two high-court appointees.

Republicans also attacked Mr. Obama and his comments about empathy a number of times - possibly making Sotomayor's hearing a prop in a larger fight, according to Cohen.

The thrust of the Republican case against Sotomayor stems from her "wise Latina" comment.

Sotomayor offered a polite, brief but firm rebuttal in her opening statement, her first substantive remarks since Mr. Obama nominated her in May to replace Justice David Souter, who retired last month.

She explained that her own experiences helped her listen to and understand the people who appear before her. "That is how I seek to strengthen both the rule of law and faith in the impartiality of our judicial system," she said.

In every case, she said, "I applied the law to the facts at hand."

Analysis: Sotomayor Has Been Very Cautious

Sotomayor Hearings Update: Is She a Prop for Larger Fight?

Sotomayor Promises "Fidelity to the Law"

Full transcript: Secretary of State Antony Blinken on "Face the Nation"
Thanks for reading CBS NEWS.
Create your free account or log in
for more features.
View CBS News In
CBS News App Open
Chrome Safari Continue
Be the first to know
Get browser notifications for breaking news, live events, and exclusive reporting.