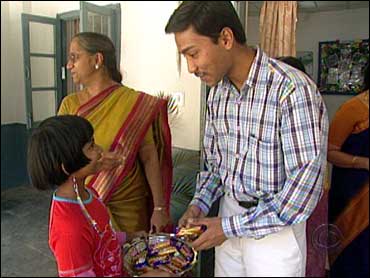 Finally, the Arizona Diamondbacks scored a bunch of runs for Randy Johnson. Even a monster home run by Sammy Sosa couldn't put much of a dent in the Diamondbacks' 10-3 victory over the Chicago Cubs on Monday night.

"You guys all know what I've been going through, and this is a relief," Johnson said.

Johnson leads the NL with a 2.58 ERA, but often the Diamondbacks have not given him much support. During one four-game stretch, his teammates didn't get him one run.

This time, Johnson's 11-strikeout performance wasn't wasted. Arizona scored six in the first five innings, four of them on a pair of two-run homers by Williams.

"If you get some runs early, it certainly helps," Williams said. "Over the last couple of months, we haven't done that a lot for him."

Sosa hit his 47th home run of the season for Chicago to tie him with Mark McGwire.

Sosa had struck out his last five at-bats against Johnson, twice in this game, before his two-run homer in the sixth. He also struck out in the eighth, but that was no big consolation for Johnson.

"You've got to strike him out 10 or 15 times to equal a distance on a home run like that," Johnson said. "But I think we have a mutual respect for one another, just like me and McGwire. He knows what I'm capable of doing and I know what he's capable of doing, and we've gotten to see both sides of that."

The 456-foot blast on an 0-1 pitch landed in the eating area outside Friday's Front Row restaurant in the second deck in left field. It was Sosa's fourth homer in the last three games.

"I hav to say that Randy's a great pitcher," Sosa said. "He pitched great tonight, just like the last time we faced him. Good pitchers are going to stop good hitters. I was just trying to make contact and do my job."

"I don't feel pressure. I have to say I know what to do," Sosa said. "I don't go up there every day expecting to have a great game. I hit a home run tonight, but I also struck out three times. That's just part of the game."

Johnson (12-8) had double-digit strikeouts for the sixth outing in a row, 19th time this season and 121st time in his career. He struck out Sosa three times, the last time in the eighth inning.

Johnson allowed six hits and didn't walk a batter, although he did hit one, in eight innings.

Williams, who also homered in Arizona's 4-0 victory over Milwaukee Sunday night, put the Diamondbacks up 2-0 in the first inning with a two-out home run to left field on a 3-0 pitch. In the third, he made it 6-0 when he hit the first pitch thrown to him into the left-center seats.

Williams has 29 home runs and 109 RBIs for the season, two fewer than McGwire, the NL leader.

Johnson's double in the second inning was his third of the season.

The Diamondbacks, who swept three games from the Cubs in Chicago last week, have won 19 of their last 25 and lead the NL West by 7 1/2 games. Chicago has lost eight of its last nine.