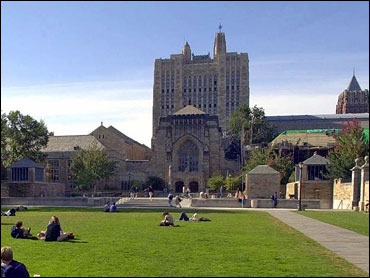 This column was written by Anne Morse.

The postman this week delivered a postcard from Yale University addressed to my son, a high-school junior. "Greetings from Yale University," it began. "Your academic achievements are impressive, and we write to urge you to consider applying to Yale. Though admission to Yale is highly selective, we offer a unique undergraduate environment for the most talented students in the world . . . Undergraduates come here from 50 states and over 70 countries around the world. They excel in virtually every field of endeavor… We would be excited for you to learn more about us and for us to learn more about you." The card was signed by undergraduate admissions dean Jeffrey Brenzel.

By coincidence, the card arrived a few minutes after I had finished reading "You've Got Mail (It's From Yale)" in the Wall Street Journal, in which John Fund details how a Yale official attacked, via anonymous e-mails, two Yale alums who criticized Yale's decision to admit Sayed Rahmatullah Heshemi, one-time mouthpiece for a terrorist gang known as the Taliban. Alexis Surovov, assistant director of giving at Yale Law School, called Clinton Taylor and Debbie Bookstaber "retarded" and "disgusting," accusing them of "terror tactics."

Like many parents, I've devoted much time to figuring out which college would be best for my son. This week, I narrowed down the list: any school but Yale.

My son's father has served in the U.S. military for nearly 20 years. We're all for diversity, but the idea of our son studying alongside, and perhaps rooming with, someone whose job it was to put a smiley face on a regime that beheaded women and offered hospitality to Osama bin Laden (whose Sept. 11 attacks killed many Yale alums and members of their families), and which is partly responsible for the fact that U.S. soldiers are now fighting and dying in Afghanistan — well, it just doesn't go down well.

Then there's the matter of Surovov's behavior. Inviting the spokesman of the Taliban to attend Yale is indicative of bad judgment; sending anonymous poison-pen e-mails to Yale's own graduates, as Surovov did, is indicative of bad character. Yale's refusal to condemn what he did is — as Surovov might phrase it — "retarded," disgraceful, and disgusting.

Yale officials are upset that fundraising has already been affected by the controversy over Hashemi. But another indicator of possible damage to Yale's reputation will not come to light until this fall, when the school may discover that applications are down. Parents of the bright young kids receiving those postcards may decide — like my husband and I have — to send their offspring elsewhere. The combination of dropping donations and applicants may well lead to a slump in Yale's U.S. News & World Report ranking, as Yale officials fear.

I hope it does. I hope Yale's ranking plummets. There has always been a certain glamour attached to an Ivy League education, and many parents dream of seeing their children walk through those Ivy gates. But in recent years the tawdry behavior of Ivy League professors and administrators—at Yale and elsewhere — has tarnished that glamour. Harvard ousted a popular president for even entertaining the possibility of innate differences between men and women. At Princeton, one well-known professor advocates bestiality, while another allowed an artist to exhibit works blasphemous to Catholic students (while acknowledging that she would never permit Muslim students to be similarly insulted). Columbia naps while its professors engage in vicious anti-Semitism. During freshman orientation at Dartmouth last fall, students were ordered to stand and pledge allegiance to a gay pride flag. And on it goes. Parents expected to pony up their life's savings, or take out crushing loans to fund such foolishness, cannot help wondering: Why are we even thinking of paying for this?

In his book, Branded Nation: The Marketing of Megachurch, College Inc., and Museumworld, James Twitchell notes that when there is a surplus of largely interchangeable items — including college campuses — which rely on image for success. "The savvy supplier is going to attach a powerful story to his version." Yale's story has always been about an elite institution that educates the best and the brightest. But today, and perhaps for years to come, the story of Yale is about a university that eagerly embraced a misogynist, terror-supporting thug who didn't make it past the fourth grade.

Thanks to efforts by Senator John Cornyn, Hashemi may soon be sent back where he came from. By then it may be too late to resuscitate Yale's reputation. Yale may hope that by refusing to talk about the Taliban Man and fundraisers gone wild, everyone will soon forget about them. But moms and dads have longer memories than Yale administrators may imagine, and some of us have had enough. There are plenty of good schools out there — and we parents are not retarded.

Anne Morse is a writer living in Maryland..

By Anne Morse
Reprinted with permission from National Review Online