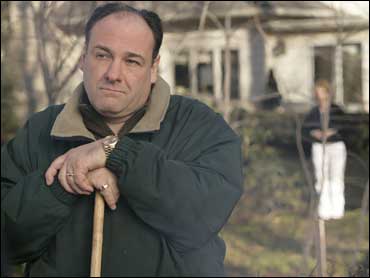 The eruption heard across the country Sunday night at 10:03 p.m. EDT: Collective exclamations of "What?" "Are you kidding me?" and "$&!?"

The choose-your-own-adventure ending of "The Sopranos" left endless loose ends that seemed to parody the typical audience expectations for a series finale. If you were bothered by the never-heard-from-again Russian who escaped assassination in the Pine Barrens, well, you're probably not very happy now.

Meanwhile, "Sopranos" creator David Chase was in France, unreachable to all press, according to an HBO publicist. You might call it a safe house, far away from the giant hit he just ordered on "Sopranos" watchers.

But as ambiguous as the conclusion of the HBO drama was, the 86th episode — titled "Made in America" — still left us with final, indelible images of the main characters.

Many expected Tony to die, but the mob boss managed to live through the episode; whether he lives much past that is a matter of subjectivity. Were the shady-looking characters hanging around the diner in the final scene there to kill Tony? Were they undercover cops? Neither? With a likely indictment hanging over his head, our last impression of Tony (James Gandolfini) was of a relatively peaceful family man who had come to terms with many of his headaches, including Uncle Junior (whom he had disavowed after Junior shot him) and therapy (which he disavowed after Dr. Melfi ended their sessions). He showed interest in both in the finale. His kids continue to disappoint, but perhaps not too much. Any judgment of Tony's lasting mental state, though, would take pages and pages, and still leave unresolved issues.

In the battle of Tony vs. Phil, New Jersey vs. New York, Tony won. Phil (Frank Vincent) met his fate at a gas station where he was shot, and then had his skull accidentally run over for good measure. Tony was able to turn Leotardo's crew after even they acknowledged that the New York boss had gone "too far" in his war. Tony blamed the "tension" partly on Leotardo's inherited insecurity from the deceased New York boss Johnny "Sack" Sacramoni, a veiled reference to Johnny Sack's sensitivity to his wife's weight. As always, slight comments linger, even beyond the grave.

Carmela (Edie Falco) remained a faithful wife to Tony and was seen flipping through real estate brochures, suggesting real estate remained her devotion. She also grown tired of Tony's use of his depression as a crutch — similar to how Tony viewed Christopher Moltisanti's alcoholism. When Tony spoke to A.J.'s therapist about the hurt his mother caused, Carmela's eyes rolled.

Tony's son was his old self. He didn't kill himself, his dad or figure prominently in the mob war fallout. Instead, A.J. (Robert Iler) griped about America and quoted "Yeets." He accidentally burned his SUV to a crisp, but also finally kissed his model friend Rhiannon. He decided he wanted to join the Army, but was dissuaded when his parents got him a job on a movie, which was put into production after "Danny" Baldwin passed a script to Tony. That future seemed no more likely to last for A.J. than any other, but it was he who warmed his family in the final scene by quoting Tony in wanting to "remember the times that were good."

Tony's daughter (Jamie-Lynn Sigler) mainly remained on the sidelines in the finale, as she had for much of the season. She and Patrick Parisi are headed for marriage, and he might be getting her a job at his law firm once she's completed law school. When Tony pressed her on why she wasn't still going to medical school, Meadow said she became interested in law only after seeing the police badger her family — perhaps furthering Tony's guilt. We also learned that Meadow is an absolutely terrible parallel parker.

We learned more about the FBI agent (Matt Servitto) in the final episode than in all those before it: His job is hurting his relationship, and he's having an affair with another agent. Harris also supplied Tony with the approximate location of Leotardo. Working terrorism, he clearly misses the more understandable, exciting world of the Mafia. When told of Leotardo's death, he cheered: "We're gonna win this thing!" There were, though, several reveals of FBI surveillance on Tony, including phone taps. And Carlo Gervasi was rumored to have flipped after his son was arrested for selling ecstasy.

The Soprano soldier (Tony Sirico) proved both his allegiance to Tony and his deep distrust of felines. A cat adopted by the crew that sat and stared at a photo of Christopher particularly bugged Paulie, who thought it might signify a "jinx" following Christopher's death. Though Paulie was suspected of cooperating with the New York family, he proved loyal to Tony. When Tony offered Paulie Carlo's job, Paulie hesitated, but eventually took it. In between, he showed he was feeling his age, and was haunted by sighting of the Virgin Mary — in the Bada Bing, of all places.

After being shot last week on orders from Leotardo, Silvio (Steven Van Zandt) was only shown briefly laid up unconscious in a hospital bed, his wife quietly filing his toenails. No mention was made of any recovery for Tony's second in command.

Tony's sister and the wife of the late Bobby Bacala was shown in mourning, but feeling relatively resilient. Janice (Aida Turturro) joked to Tony: "I need to watch my weight. I need to snag another husband."

Tony had long abandoned his increasingly senile uncle and former head of the family after Junior (Dominic Chianese) accidentally shot Tony at the start of the sixth season. But Tony visited Junior at what appeared to be a state-run old-age home, to tell him to leave his money (if he can remember where he buried it) to Bacala's children. Junior didn't recognize Tony; when Tony reminded Junior that he once ran Northern New Jersey with Tony's father, Junior replied: "We did? That's nice."

Melfi (Lorraine Bracco) was a no-show in the finale after her abrupt termination of therapy with Tony in the penultimate episode. Tony appeared to use A.J.'s therapist as a Melfi stand-in, divulging, "You see, I never could please my mother." You can take the mobster out of therapy, but you can't take therapy out of the mobster.