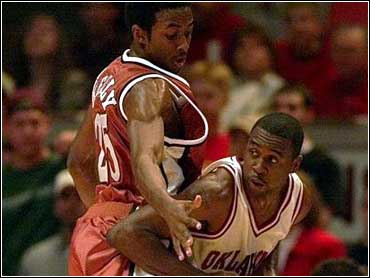 Oklahoma coach Kelvin Sampson got just what he said his 18th-ranked Sooners would need to beat No. 16 Texas - contributions from more than just a player or two.

Sampson always figures Eduardo Najera will play well, and he did again Monday night with 18 points and 16 rebounds in Oklahoma's 83-59 victory.

But second-leading scorer J.R. Raymond had 25 points, his best night since scoring 29 in the season opener. Then there was Victor Avila coming off the bench for 13 points, Nolan Johnson scoring 10 points with six rebounds, and Kelley Newton with nine points and six rebounds.

Mix in a strong defensive showing across the board, and the result was Texas' most lopsided loss of the season.

"When we attack and run our stuff and we're aggressive and do the little things right, then we can play," Sampson said. "This was a total team effort. I could tell that the kids had their focus and they were ready to play."

Gabe Muoneke of Texas tied a career high with 30 points in that game, but wasn't a factor this time. The Longhorns (14-6, 6-2) had to rely on 7-footer Chris Mihm, who had 21 points and 12 rebounds but was swarmed by defenders just about every time he touched the ball. As a result, he was just 7-of-17 from the field.

Najera didn't appear bothered by a broken bone in his left hand, an injury suffered in practice last week. He banged with Mihm all night, and occasionally Muoneke, and sparked Oklahoma with his hustle.

"I tought that our big guys really battled them inside," Sampson said. "I thought we were really physical and really competed with them at the defensive end."

Muoneke, who averages 14 points per game, picked up two fouls, one of them a technical, in the first two minutes. He never got going and finished with six points.

The technical came as Muoneke headed back down the floor after making a basket. He said he was talking to himself to pump himself up.

"I don't know how to play when you're afraid to touch someone for fear of getting a foul. I just can't play that way," he said.

The Longhorns survived from the perimeter early, but didn't hit from inside or outside while going nearly 7 1/2 minutes without scoring midway through the first half.

"You expected Oklahoma to come out like they did," Longhorns coach Rick Barnes said. "With 2 1/2 minutes to go, we were in good shape. Then our offense, we had a couple turnovers on dribble drives and didn't have floor balance and they converted some easy baskets."

The closest Texas got after that was 10 points, on two free throws by Muoneke to open the second half. Oklahoma repeatedly beat the Longhorns down court for easy baskets and took advantage of their poor shooting to keep pulling away.

Before Monday, the Longhorns' worst loss had been 61-45 at Wisconsin on Dec. 7.