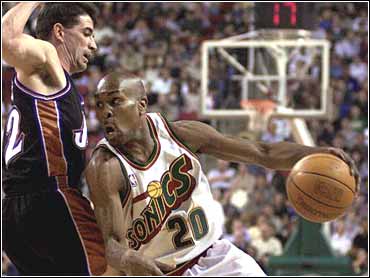 Gary Payton, the Seattle SuperSonics' All-Star guard, was suspended Thursday for at least one game after a sideline confrontation with a teammate, his latest clash in a tempestuous season.

Team president and general manager Wally Walker said Payton was suspended for "conduct detrimental to the team" but gave no details.

Payton and teammate Ruben Patterson had an angry confrontation during a fourth-quarter timeout in Wednesday night's 89-80 home loss against Phoenix.

"To fight amongst ourselves is the wrong thing to do," The Seattle Times quoted coach Nate McMillan as saying after the game. "Tempers did fly. That can't happen."

Patterson declined to discuss the problem after the game and Payton was not available.

Payton was suspended earlier this season after a confrontation with then-coach Paul Westphal in the huddle Nov. 21 at Dallas.

The emotional Payton had to be separated from his coach on the court. Afterward, he criticized Westphal to reporters.

Walker announced the next day that Payton was suspended for the Sonics' game that night at San Antonio. Payton met with Westphal, apologized and got the suspension lifted.

Five days later, the Sonics fired Westphal and replaced him with the popular McMillan, a former Seattle player and assistant.

Payton is an 11-year veteran and six-time All-Star who is the team's career scoring leader. He often has clashed with teammates and coaches.

He was involved in a much-publicized weight-room brawl last season with former teammate Vernon Maxwell. Horace Grant was injured in that scuffle, reportedly by a thrown weight.

The Sonics' next game is at home against Minnesota Friday night.