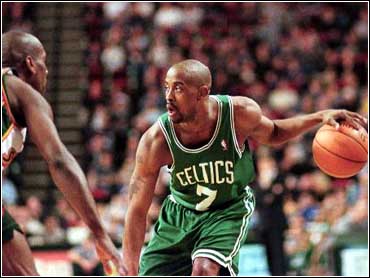 Vin Baker was at his best with the game on the line for the Seattle SuperSonics.

Baker was 4-for-4 from the field in the final six minutes, and Gary Payton added 27 points as the SuperSonics beat the Boston Celtics 94-91 on Saturday night.

"A lot of people have been knocking him about not stepping up and playing big in the fourth quarter," Brent Barry said. "He did it tonight. Hopefully, that's a sign of things to come."

Baker sat out the first six minutes of the fourth quarter because of foul trouble. After Boston's Antoine Walker tied it at 83, Baker played like an All-Star.

"I had a nice rest and when I came back I wanted to finish the deal," said Baker, who finished with 17 points and eight rebounds. "Fortunately, I was able to make some big baskets."

The Celtics had a chance to tie, but missed a 3-pointer with nine seconds left.

Both teams rebounded with solid performances after one-sided losses Friday night. Seattle was coming off a 118-85 loss to Sacramento, and Boston a 122-100 setback at Golden State.

Celtics coach Rick Pitino was pleased with his team's effort.

"If we can keep building on this, we'll get better and better."

Pierce said his team had plenty of chances.

"We were right there," he said. "We got two layups and a shot to tie the game and none of them dropped. Our mistakes down the stretch cost us."

The Sonics biggest lead in the last five minutes was 89-85, with the Celtics staying close ehind Pierce and Walker.

Payton scored 15 points during the third period. Anderson's two baskets, including a buzzer-beater from 15 feet, gave Boston a 71-69 lead after three periods.

Boston beat Seattle 111-86 during their first meeting at the Fleet Center on Jan. 21.

The Celtics outscored the Sonics 11-2 over the last 2:56 of the first half for a 49-44 halftime lead. Dana Barros and Pierce made 3-point shots during the spurt.

Seattle had taken a 42-38 lead with a 9-0 run. A blocked shot and assist by Foster and five points by Payton fueled the spurt.