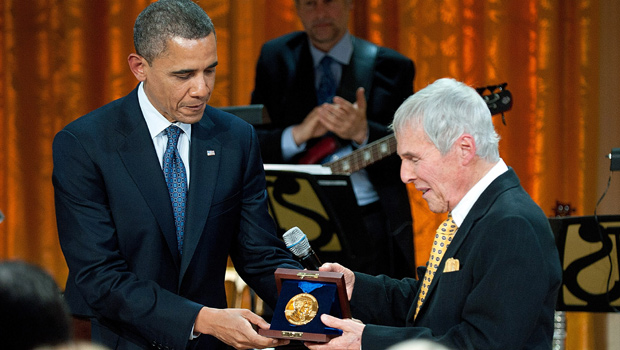 (CBS/AP) President Barack Obama honored Burt Bacharach and Hal David as "two kings of songwriting" on Wednesday night at the White House, with the Library of Congress Gershwin Prize for Popular Song.

The duo received the honor during a tribute concert in the East Room, featuring Stevie Wonder, Sheryl Crow, Lyle Lovett and others. Wonder sang their tunes "Make It Easy on Yourself" and "Alfie," wowing the crowd on his harmonica.

Bacharach, 83, thanked Mr. Obama, saying the award for his life's work topped even the Oscars and Grammys he won for individual projects. David, 90, could not attend because he is recovering from a stroke. His wife, Eunice David, accepted on his behalf.

Bacharach and David have written many unforgettable tunes - "Raindrops Keep Fallin' On My Head," ''Close to You" and "That's What Friends Are For" all come from their songbook. They produced dozens of top 40 hits, churning out hit music for movies, television and a variety of recordings artists in the 1960s and beyond.

"Above all, they stayed true to themselves," Mr. Obama said. "And with an unmistakable authenticity, they captured the emotions of our daily lives - the good times, the bad times, and everything in between."

Bacharach told The Associated Press he wanted to hear the president sing a few lines "because the guy can really sing."

"I heard him on YouTube sing 'Walk On By,' and it just blew me away," Bacharach said.

The White House ousted reporters from Wednesday's concert before there was any chance to hear Mr. Obama sing again.

The private concert will be broadcast May 21 on PBS for the series "In Performance at the White House." The library also hosted a concert Tuesday night featuring Warwick.