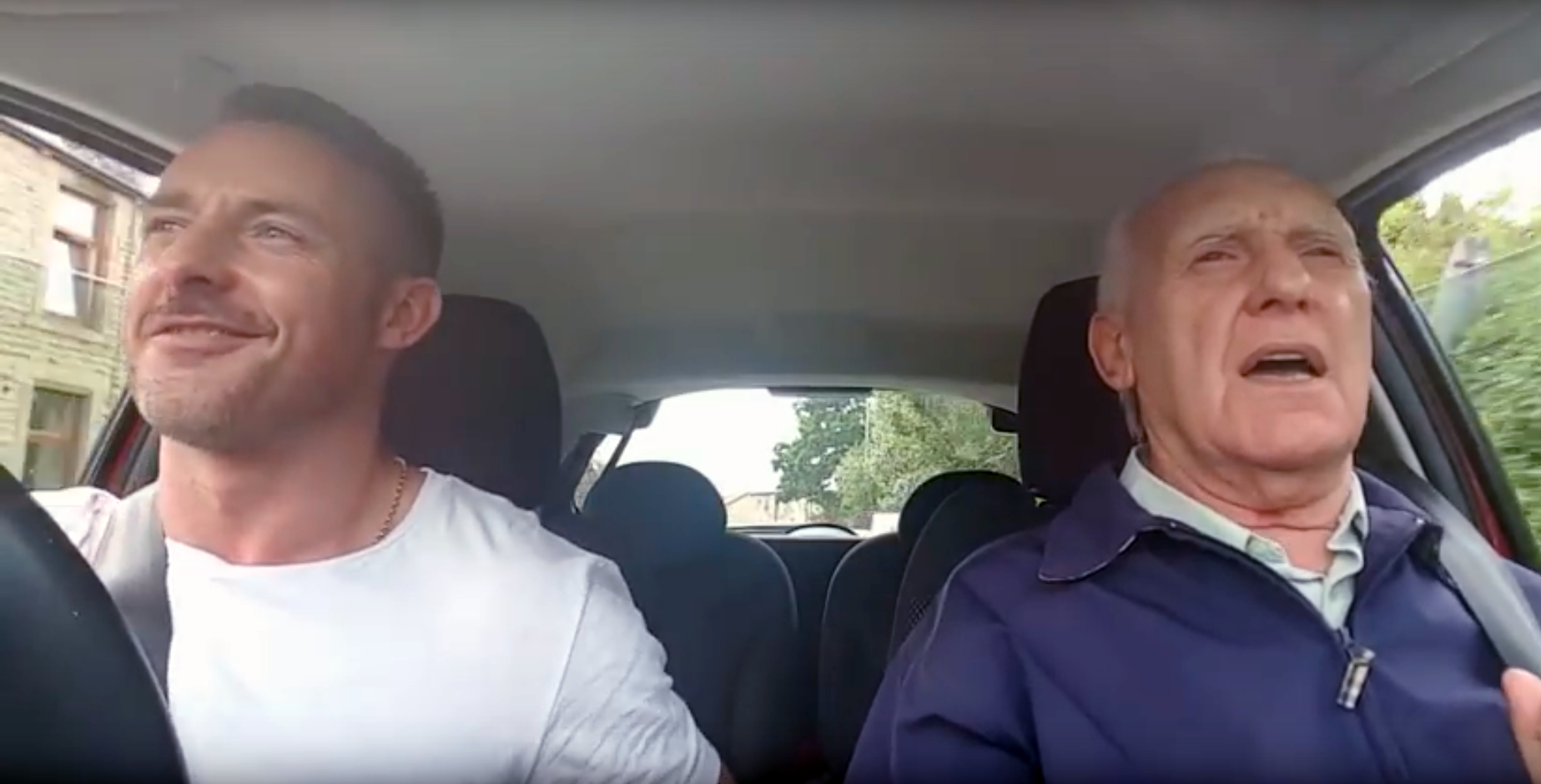 Seventy-nine-year-old Ted McDermott has sung his entire life. He was a Butlin’s Redcoat, then travelled around performing in clubs across the U.K. He was even nicknamed “The Songaminute Man” for the sheer quantity of tracks he knew by heart.

McDermott was diagnosed with dementia in 2013. Since then, his family has noticed his memory deteriorate quite a bit.

“My dad’s not usually aggressive, but he became very aggressive and very confrontational,” McDermott’s son, Mac, explained to CBS News. “He would say horrible things. It was a nightmare.”

On the bad days, in addition to growing aggressive, Ted would become extremely confused. So, Mac developed a routine where he would take his father for a drive and the two of them would sing together to calm him back down.

“It became a thing. Any time my dad started to get confused, I’d take him out for a drive and I’d put on the music,” says Mac. “He’d become himself again. And afterward, he’d be a lot happier. It’s given him a sense of purpose really. It’s given him a focus. He’s very confused these days, so the music really helps.”

The clips of Ted and Mac McDermott singing together -- carpool karaoke style -- have gone viral, but Mac explains that was never really his intention.

“In the beginning I just wanted to record them for myself. Then, I started putting them on Facebook because I wanted my friends to hear my dad sing. All my friends knew my dad was a singer, but they didn’t know how good he was.”

Now, the whole world knows. And other families struggling with Alzheimer’s disease are finding hope in the videos that Ted and Mac have posted.

“I’ve gotten so many messages,” says Mac. “‘Thank you for doing this.’ ‘You’ve given me hope.’ One night, I went to bed and I think I had 1,000 new messages when I woke up the next morning. People from all over the world: the Philippines, Australia, Brazil... messages just coming in like crazy.”

And now, the McDermott family is using all that attention for good, using their heartwarming videos to raise money for the Alzheimer’s Society. Their page on justgiving.com has raised more than $121,000 to date and they’re directing all the funds they raise to the national dementia helpline.

“I rang them twice,” explains Mac. “The second time I rang them, I completely broke down. So, I just wanted to make sure that people in the same situation as me could have someone that they could ring and they could talk to somebody.”

While Mac acknowledges that the last two years have been extremely tough on his family -- especially his mom, who he describes as the family’s rock -- he also points out that, among “all these very nasty days, there are some good days too.”

Recently, for example, his father has been asking his mother to marry him again — sometimes as often as six times a day.

And a few weeks ago, Mac experienced a similar sort of special moment himself.

“I took my dad to the pub and I went up to the bar to got us some drinks. When I got back to the table, he didn’t recognize me. So, he said, ‘Do you live in London?’ And I said, ‘Yeah, I live in London.’ And he said, ‘Oh, my son lives in London!’ Then, we talked about me for nearly an hour. I would’ve never heard how he felt about me. I was nearly in tears from happiness. That was like a gift that somebody gave me. It was a perfect moment.”

“You can do it,” he says. “It’s really tough. There’s no way of getting around it, but there’s support out there. There are places where you can get advice and help. You’re not alone. So, just keep trucking.”

If you can do it with music, all the better.