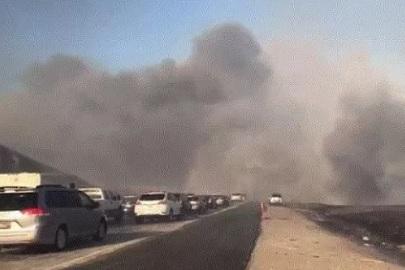 LOS ANGELES -- Firefighters continued to build containment around several destructive wildfires in California amid a somewhat promising forecast. But one stubborn blaze in the northern part of the state grew significantly and crossed the border into Oregon.

The blaze on the California-Oregon state line known as the Klamathon Fire grew to 55 square miles and leapt into Oregon. It was 25 percent contained.

The fire, one of many in the drought-ridden U.S. West, killed one person and destroyed 72 structures, including houses.

It also injured three firefighters, including one who had severe burns to his face, according to a Gofundme page that raised more than $28,000 for him in less than 24 hours.

The Cal Fire firefighter, Brandon Feller, was injured the day the blaze broke out, Thursday, but was making a strong recovery, according to the page.

More than 2,300 firefighters continued to fight the fire Sunday amid low humidity and strong winds. Crews were hoping to keep it from jumping a river and threatening additional communities.

"They made some really good headway on holding the fire so we're just hoping we can keep it there," said Suzi Brady, a spokeswoman for the crews fighting the fire.

A 500-acre wildfire flared up Sunday night and temporarily shut down Interstate 580 at the Altamont Pass, which is about 40 miles east of Oakland. The Alameda County Fire Department said westbound lanes reopened after about an hour.

The state's largest blaze, the 141-square-mile County Fire, was 65 percent contained. It has destroyed a dozen structures since it broke out June 30.

Other major fires in the state were close to being fully contained.

The National Weather Service said firefighters should get relief this week from cooler temperatures, the Reuters news service reports.

In southern Colorado, firefighters were making progress Sunday on a wildfire that had burned more than 130 homes and blackened nearly 170 square miles.

Investigators say an illegal campfire sparked the blaze east of Fort Garland on June 27, and it has since become the third-largest in state history. It also forced the evacuation of more than 2,000 homes.

The fire is 55 percent contained.

Elsewhere, firefighters were taking advantage of rain showers and increased humidity in their battle against a wildfire that has been burning for more than a month near Durango in southwestern Colorado. That fire has scorched about 85 square miles and is 50 percent contained.

Firefighters were also dealing with several other major wildfires across Colorado.

In neighboring Utah, more residents were allowed back into their homes Sunday after being driven out by a wind-fueled fire. The blaze burning near a popular fishing lake 80 miles southeast of Salt Lake City was 35 percent contained, according to Duchesne County Sheriff's officials. The wildfire has charred about 75 square miles and destroyed 90 structures, including homes, since starting July 1.