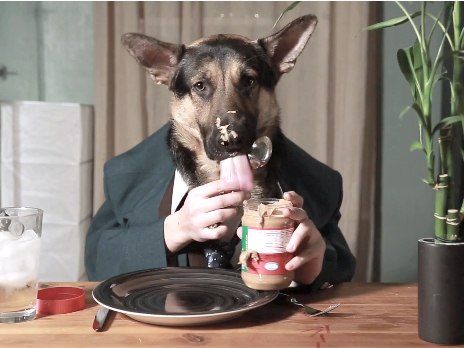 (CBS News) As a kid growing up, my friends and I were huge fans of watching professional wrestling. We idolized the likes of Hulk Hogan, The Undertaker, Andre the Giant, "Macho Man" Randy Savage (we still mourn the latter two) and many more colorful characters. And the video above is somewhat reminiscent of that time period in my young life... except it's way more cute and furry! Watch two pandas go head-to-head for the Adorable Wrestling Belt title.

Awwww... I feel like the little one never stood a chance. But they both end up winning our hearts! The playful animal antics that resembles wrestling are actually occurring between a panda mother and her cub, and were captured on film at Adventure World in Shirahama, Japan.

And while our first video covered the "playful" portion of our headline, this next one without question fits the "bizarre" bill. Check out a German Shepherd named Odin eating some peanut butter "like a person" below. If you laugh even half as hard as the person "behind" this random video (in more than one sense), I'd say that I've managed to do my blogging job very well today.