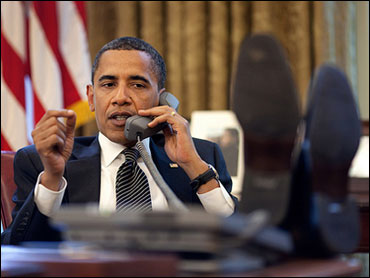 They saw the incident as somewhat akin to an incident last year, when the Iraqi reporter threw a shoe at President Bush in Baghdad.

It is considered an insult in the Arab world to show the sole of your shoe to someone. It is not a Jewish custom necessarily, but Israel feels enough a part of the Middle East after 60 years to be insulted too.

Was there a subliminal message intended from the White House to Netanyahu in Jerusalem, who is publicly resisting attempts by Mr. Obama and Secretary of State Hillary Clinton to force Israel to stop any kind of settlement activity in occupied territories once and forever?

Whether or not it is true, it shows the mood in Israel. They feel cornered. The reactions out of Israel reflect that feeling.

Netanyahu is making a speech Sunday, in part as a response to Mr. Obama's address to the Arab world last week in Cairo.

Israel's Channel One TV reported that Netanyahu was told Tuesday by an "American official" in Jerusalem that, "We are going to change the world. Please, don't interfere." The report said Netanyahu's aides interpreted this as a "threat."

Netanyahu met with George Mitchell today for four hours in Jerusalem. The State Department announced this afternoon that Mitchell will be stopping in Beirut and Damascus when he finishes his visits to Israel and the Palestinian Authority.