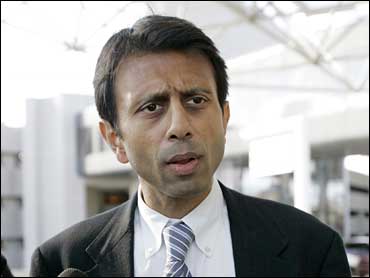 A handful of Republican governors are considering turning down some money from the federal stimulus package, a move opponents say puts conservative ideology ahead of the needs of constituents struggling with record foreclosures and soaring unemployment.

Though none has outright rejected the money available for education, health care and infrastructure, the governors of Texas, Mississippi, Louisiana, Alaska, South Carolina and Idaho have all questioned whether the $787 billion bill signed into law this week will even help the economy.

"My concern is there's going to be commitments attached to it that are a mile long," said Texas Gov. Rick Perry, who considered rejecting some of the money but decided Wednesday to accept it. "We need the freedom to pick and choose. And we need the freedom to say 'No thanks."'

U.S. Rep. James Clyburn, D-S.C., the No. 3 House Democrat, said the governors - some of whom are said to be eyeing White House bids in 2012 - are putting their own interests first.

"No community or constituent should be denied recovery assistance due to their governor's political ideology or political aspirations," Clyburn said Wednesday.

In fact, governors who reject some of the stimulus aid may find themselves overridden by their own legislatures because of language Clyburn included in the bill that allows lawmakers to accept the federal money even if their governors object.

He inserted the provision based on the early and vocal opposition to the stimulus plan by South Carolina's Republican governor, Mark Sanford. But it also means governors like Sanford and Louisiana's Bobby Jindal - a GOP up-and-comer often mentioned as a potential 2012 presidential candidate - can burnish their conservative credentials, knowing all the while that their legislatures can accept the money anyway.

On CBS' The Early Show Sanford said Thursday the sheer size of the stimulus package will end up hindering any economic recovery.

"I think the problem that was created with too much debt will never be solved by adding yet more debt," he said. "I think there are a number of wrinkles that have caused a number of us to say 'Wait a minute, let's take a long look at whether or not this really makes sense for our state.'"

Still, Sanford said he would accept the funds.

"Being against it doesn't preclude taking the money."

CBS News correspondent Bill Whitaker reported that the stimulus funds may be looking incredibly attractive to the 46 states facing serious budget shortfalls. California, where Gov. Arnold Schwarzenegger is struggling to get a budget passed amid strong opposition from fellow Republican lawmakers to tax hikes, is by far the worst case. Schwarzenegger and almost all state lawmakers have quickly agreed that the money from Washington is needed.

Whitaker reported that all 28 Democratic governors and four Republican governors, including Charlie Crist of Florida, welcomed the stimulus money. "This is not about partisan politics," Crist said. "This is about rising above that." (See Whitaker's Evening News report.)

But, Jindal said he, like Perry and Mississippi Gov. Haley Barbour, is concerned about strings attached to the money even though his state faces a $1.6 billion budget shortfall next year.

Barbour spokesman Dan Turner, for example, cited concerns that accepting unemployment money from the stimulus package would force states to pay benefits to people who wouldn't meet state requirements to receive them.

In Idaho, Gov. C.L. "Butch" Otter said he wasn't interested in stimulus money that would expand programs and boost the state's costs in future years when the federal dollars disappear - a worry also cited by Jindal and Alaska Gov. Sarah Palin.

A spokesman said Sanford, the new head of the Republican Governors Association, is looking at the stimulus bill to figure out how much of it he can control.

"We're going through a 1,200-page bill to determine what our options are," Spokesman Joel Sawyer said. "From there, we'll make decisions."

But state Democratic Party chairwoman Carol Fowler says Sanford's hesitation is driven by his political ambition rather than the best interests of a state that had the nation's third-highest unemployment rate in December.

"He's so ideological," Fowler said. "He would rather South Carolina do without jobs than take that money, and I think he's looking for a way not to take it."

(AP Photo/Charles Dharapak)
As Whitaker reported, not all Republican governors are reticent about using the federal cash.

Crist (seen at left with Mr. Obama in Ft. Myers, Fla.) lobbied for the stimulus plan and Georgia Gov. Sonny Perdue has embraced it as he looks to close a $2.6 billion deficit in the state's budget this year. Alabama Gov. Bob Riley has already figured the money into his state's budget.

Pearson Cross, a political scientist at the University of Louisiana at Lafayette, said fiscally conservative governors may be able to give themselves political cover by turning down small portions of the stimulus money, like health care dollars requiring a state match, that they might not fully use anyway.

But in the end, he said, they will likely take most of the available money because their states need it so badly.

"Ideology usually takes second place for governors," he said. "And that's going to mean that most governors are going to go ahead and take the money even though they have misgivings about it."