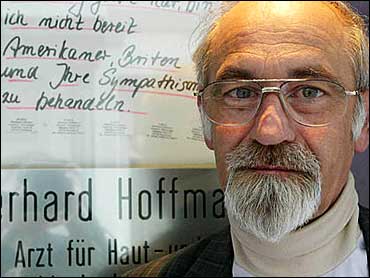 In Europe, where the burgers aren't served with "freedom fries," some restaurants were refusing to sell Coca-Cola, Marlboro cigarettes and other internationally known U.S. brands in boycotts spurred by anti-war sentiment.

In the northern port city of Hamburg, Germany, 10 owners of French restaurants decided last week to strike alcohol, tobacco and other goods with U.S. brand names from their menus.

Jean-Yves Mabileau of L'Auberge Francaise said he was happy to take part in the action, partly out of retaliation against the boycott of French products in the United States and partly to protest the war.

He threatened to take things a step further if the war did not end soon.

"If the Americans won't calm down, I'll start refusing to accept American Express and other U.S. credit cards," said Mabileau, adding he didn't think the move would hurt business.

The movement is not confined to Germany. Several Web sites call for Europeans to stop consuming leading U.S. products, and other countries have seen similar calls to reject American goods.

The ill will began earlier this month, when the U.S. House cafeteria — following the lead of several businesses around the United States — amended its menu to feature "freedom fries" and "freedom toast" in a slap at France's refusal to support the war on Iraq.

Things snowballed from there. Greek filmmakers, including award-winning director Theo Angelopoulos, have called for a boycott of U.S. movies to protest the war in Iraq.

In the southeastern French city of Bayonne, the staff of a bar run by anti-militarists dumped their Coca-Cola stock into the sewers.

The head of a leading German-American trade association warned that such efforts to punish the United States could backfire, hurting the local economy far more than U.S. multinationals.

"The Coca-Cola drunk in Germany is manufactured in Germany with German employees, and they only hurt themselves," said Fred Irwin, head of the Frankfurt-based American Chamber of Commerce.

The sentiment was echoed by Ricarda Ruecker, a spokeswoman for McDonald's Germany, who said the company has seen no decline in its sales. She added that the company has worked hard to put across the message that it was German.

"The name doesn't really tell you anything," Ruecker said. "A boycott in Germany would only damage the economy here."

Stefan Bielmeier, an economist and trade specialist at Deutsche Bank, predicted the boycotts wouldn't have much impact: "I expect no visible effects."

Recent polls have shown that more than 80 percent of Germans are against the war in Iraq and fully support Chancellor Gerhard Schroeder's tough stance against the U.S.-led fighting.

Over the weekend, more than 100,000 people protested in Germany, half of them at a rally in Berlin, where banners read "Stop America's Terror." About 30,000 people held hands along the 31 miles between the northwestern cities of Muenster and Osnabrueck — a route used by negotiators who brought the Thirty Years War to an end in 1648.

Since the war began anti-war demonstrators around the globe have turned out in the tens of thousands, spattering streets with paint and jeering outside U.S. embassies.

Hundreds of women, some carrying placards declaring "the United States and Britain are the axis of evil," protested in San'a, Yemen. Elsewhere in the Arab world, 10,000 turned out at a rally organized by Egypt's ruling party in Port Said, and in Amman, Jordan, more than 3,000 people demanded that the kingdom expel U.S. troops.

Protesters in Rome hung black mourning banners from the city's bridges. At Vicenza, in northeastern Italy, demonstrators threw red paint and flares at the walls of a U.S. military base where hundreds of paratroopers now in northern Iraq had been based.

In Athens, Greece, 15,000 people chanting "We'll stop the war" marched to the U.S. Embassy. Protesters splashed red paint on the road outside the building and on the windows of a McDonald's restaurant.