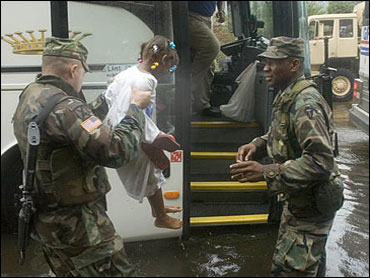 Thousands of National Guardsmen with food, water and weapons streamed into hurricane-ravaged New Orleans Friday to bring relief to the suffering multitudes and put down the looting and violence. "The cavalry is and will continue to arrive," said one general.

"We have seen very few of those since this hurricane hit," McCormick said.

Assurances of the arrival of more aid came amid blistering criticism from the mayor and others who said the federal government was bungling the relief effort while people lay dying in the streets for lack of food, water or medicine.

Adding to the fear in New Orleans: Before dawn Friday, an explosion at a chemical depot rocked a wide area of New Orleans and jolted residents awake, lighting up the dark sky and sending a pillar of acrid gray smoke over a ruined city awash in corpses, under siege from looters, and seething with anger and resentment. There were no reports of injuries or toxic fumes from the blast.

How could a major U.S. city descend into anarchy?

Lt. Gen. Steven Blum of the National Guard said 7,000 National Guardsmen arriving in Louisiana on Friday would be dedicated to restoring order in New Orleans. He said half of them had just returned from assignments overseas and are "highly proficient in the use of lethal force." He pledged to "put down" the violence "in a quick and efficient manner."

"But they are coming here to save Louisiana citizens. The only thing we are attacking is the effects of this hurricane," he said. Blum said that a huge airlift of supplies was landing Friday and that it signaled "the cavalry is and will continue to arrive."

Across the city, law and order has broken down. Police officers turned in their badges. Rescuers, law officers and helicopter were shot at by storm victims. Fistfights and fires broke out Thursday at the hot and stinking Superdome as thousands of people waited in misery to board buses for the Houston Astrodome. Corpses lay out in the open in wheelchairs and in bedsheets. The looting continued.

"I do not want this sense of lawlessness to continue, because it's hampering our efforts to bring people in, to save people," Blanco said on The Early Show.

The early morning blast occurred at a chemical storage facility near the Mississippi River across the river from the French Quarter, in 55-gallon drums. An official said the smoke was not particularly toxic.

Later, there were other explosions, and at least one fire in a downtown building, but McCormick reports all emergency personnel can do is watch. "There are no fire trucks on the scene, there is no water pressure in this city," she said.