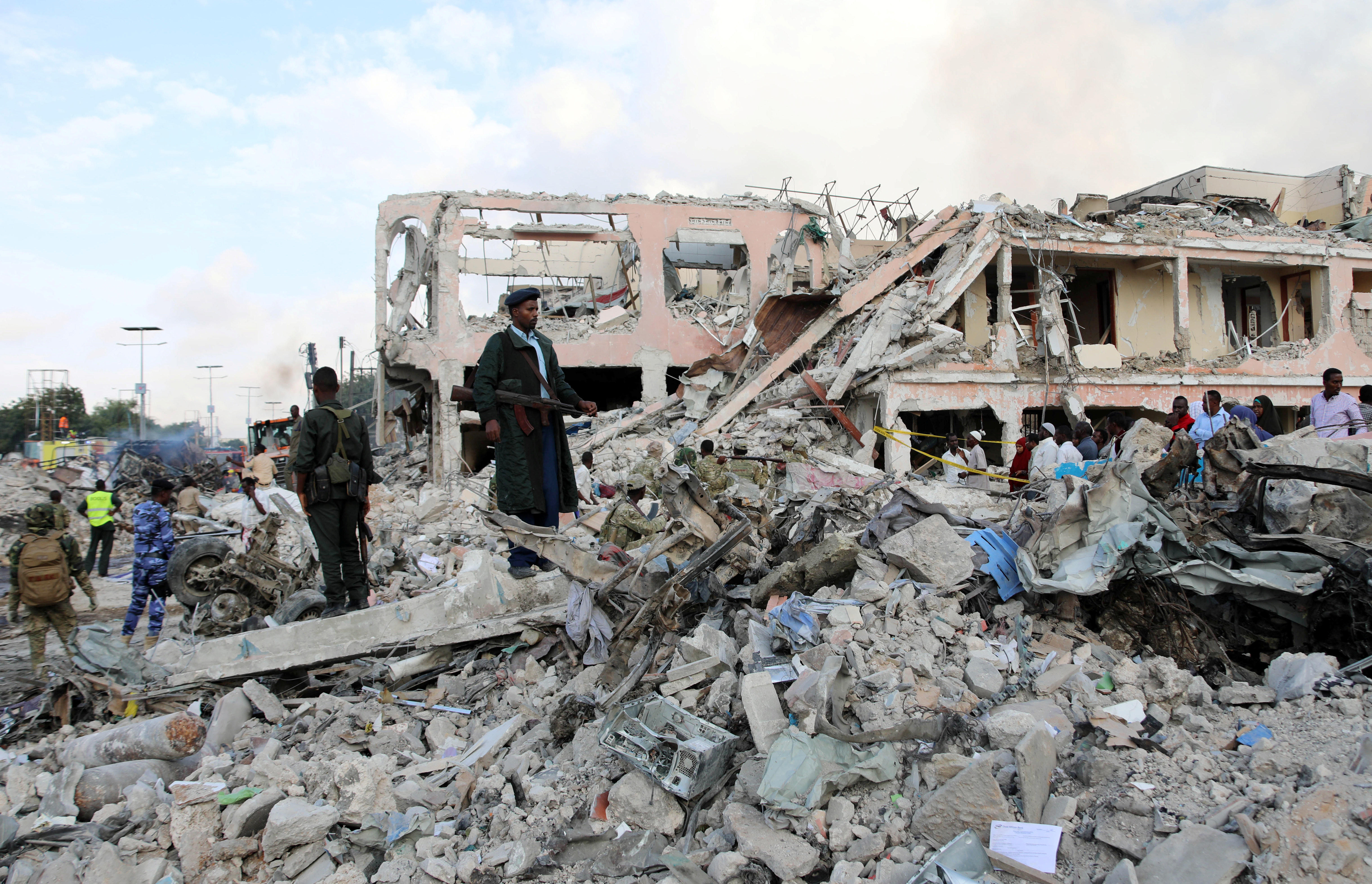 The incident marks the deadliest single attack ever in this Horn of Africa nation, said a senator.

In a tweet, Abdirahman Osman called the attack "barbaric" and said countries including Turkey and Kenya had already offered to send medical aid. Hospitals were overwhelmed a day after a truck bomb targeted a crowded street near key government ministries, including foreign affairs.

The Mogadishu bombing is one of the deadliest attacks in sub-Saharan Africa, larger than the Garissa University attack in Kenya in 2015 and the U.S. Embassy bombings in Kenya and Tanzania in 1998.

"The members of the Security Council reaffirmed that terrorism in all its forms and manifestations constitutes one of the most serious threats to international peace and security," the UNSC said in a statement. It added that Somalia needs "to bring perpetrators, organizers, financiers and sponsors of these reprehensible acts of terrorism to justice."

U.N. Security General Antonio Guterres said in a tweet that he was "sickened" by the attacks.

As angry protesters gathered near the scene of the attack, Somalia's government blamed the al Qaeda-linked al-Shabab extremist group for what it called a "national disaster." However, Africa's deadliest Islamic extremist group, which often targets high-profile areas of the capital, had yet to comment.

Al-Shabab earlier this year vowed to step up attacks after both the Trump administration and Somalia's recently elected president announced new military efforts against the group.

Doctors at Mogadishu hospitals struggled to assist badly wounded victims, many burned beyond recognition. "This is really horrendous, unlike any other time in the past," said Dr. Mohamed Yusuf, the director of Medina hospital.

Inside, bleary-eyed nurses transported a man whose legs had been blown off. He waited as surgeons attended to another badly injured patient. Exhausted doctors struggled to keep their eyes open, while screams from victims and newly bereaved families echoed through the halls.

"Nearly all of the wounded victims have serious wounds," said nurse Samir Abdi. "Unspeakable horrors." The smell of blood was strong.

A teary-eyed Hawo Yusuf looked at her husband's badly burned body. "He may die waiting," she said. "We need help."

Ambulance sirens echoed across the city as bewildered families wandered in the rubble of buildings, looking for missing relatives. "In our 10 year experience as the first responder in #Mogadishu, we haven't seen anything like this," the Aamin Ambulance service tweeted.

"There's nothing I can say. We have lost everything," wept Zainab Sharif, a mother of four who lost her husband. She sat outside a hospital where he was pronounced dead after hours of efforts by doctors to save him.

The country's Somali-American leader, President Mohamed Abdullahi Mohamed, declared three days of mourning and joined thousands of people who responded to a desperate plea by hospitals to donate blood. "I am appealing all Somali people to come forward and donate," he said.

Mogadishu, a city long accustomed to deadly bombings by al-Shabab, was stunned by the force of Saturday's blast. The explosion shattered hopes of recovery in an impoverished country left fragile by decades of conflict, and it again raised doubts over the government's ability to secure the seaside city of more than 2 million people.

"They don't care about the lives of Somali people, mothers, fathers and children," Prime Minister Hassan Ali Khaire said of the attackers. "They have targeted the most populated area in Mogadishu, killing only civilians."

Rescue workers searched for survivors trapped under the rubble of the largely destroyed Safari Hotel, which is close to Somalia's foreign ministry. The explosion blew off metal gates and blast walls erected outside the hotel.

A reporter from BBC News was at the scene of the main explosion and reports that the Safari Hotel had collapsed and people were trapped underneath the rubble.

BBC News also writes that officials confirmed that two people were killed in a second bomb attack in the Madina district of the city.

The United States condemned the bombing, saying "such cowardly attacks reinvigorate the commitment of the United States to assist our Somali and African Union partners to combat the scourge of terrorism." It tweeted a photo of its charge d'affaires in Somalia donating blood.

But the U.S. Africa Command said U.S. forces had not been asked to provide aid. A spokesman told The Associated Press that first responders and local enforcement would handle the response and "the U.S. would offer assistance if and when a request was made."

The U.S. military has stepped up drone strikes and other efforts this year against al-Shabab, which is also fighting the Somali military and over 20,000 African Union forces in the country.

The United Nations special envoy to Somalia called the attack "revolting," saying an unprecedented number of civilians had been killed. Michael Keating said the U.N. and African Union were supporting the Somali government's response with "logistical support, medical supplies and expertise."

The spokesman for U.N. Secretary-General Antonio Guterres strongly condemned the attack and urged all Somalis to unite against extremism and work together to build a "functional" federal state.

Amid the chaos, the stories of victims began to emerge. Amino Ahmed said one of her friends, a female medical student, was killed on the eve of her graduation. The explosion also killed a couple returning from a hospital after having their first child, said Dahir Amin Jesow, a Somali lawmaker.