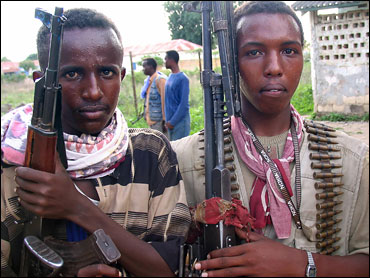 Fighters loyal to a U.S-backed alliance of warlords appeared to be anticipating an attack by a fundamentalist Islamic militia that had pushed them out of Somalia's capital, witnesses said Wednesday.

The warlords' fighters took up defensive positions in the strategic town of Jowhar, 60 miles northwest of Mogadishu. Jowhar is controlled by alliance leader Mohamed Dheere, who was believed to be in Ethiopia this week seeking reinforcements after the Islamic militia seized the capital Monday.

Mogadishu has been convulsed for months as the Islamic Courts Union, which has alleged links to al Qaeda, strengthened its grip on this lawless country. Its advance Monday came despite U.S. support for the secular alliance of warlords, and sent warlords on the run.

The militia's growing power is raising fears that Somalia could fall under the sway of al Qaeda, Osama bin Laden's terrorist organization. But on Tuesday, thousands of Somalis took to the streets of their capital to call for the fundamentalists to get out. The Islamic militia also held a demonstration, which drew hundreds.

The protests show it may be difficult to keep control of the capital, and that the courts likely still have to negotiate with the clan leaders who have been controlling the city for more than a decade.

Somalia has been without a real government since largely clan-based warlords overthrew longtime dictator Mohamed Siad Barre in 1991 and then turned on each other, dividing this nation of 8 million into a patchwork of rival fiefdoms.

The Islamic leaders have said a government based on Islamic law will restore order and they accused the secular alliance of warlords of being puppets of Washington and working for the CIA. Members of the alliance, most of whom were on the run after Monday's defeat, said the courts had links to terrorists.

The battle between the militia and the secular alliance had been intensifying in recent months, with more than 300 people killed and 1,700 wounded, many of them civilians caught in the crossfire of grenades, machine guns and mortars.

The two sides began competing for influence in earnest after a U.N.-backed interim government slowly began to gain international recognition. But the weak government, wracked by infighting, has not even been able to enter the capital because of the violence. Instead, it is operating out of a base in Baidoa, 155 miles from Mogadishu.

Weapons prices soared there amid fears the militia could head to Baidoa next.

The interim government opposes both the Islamic militia — rejecting its calls for Somalia to be governed by Quranic law — and the warlords' alliance. Interim Prime Minister Ali Mohamed Gedi recently fired four of his Cabinet ministers who were part of the secular alliance, saying they should not have embarked on independent military action.

President Abdullahi Yusuf Ahmed had objected to alleged U.S. support for the warlords, saying counterterrorism efforts should be coordinated with his government.

Neighboring Kenya, which supports the interim government, on Wednesday kicked out a Somalia warlord and said it was banning travel there by Somalis "who persist in destabilizing Somalia."

Abdul Rashid Hussein Shiry, wearing a gray suit and tie as Kenyan police led him out of a luxury Nairobi hotel, was taken to the airport for a flight back to Somalia. It was not clear how long he had been in Kenya.