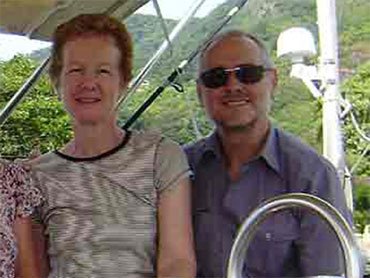 Rival pirates and militia groups have fought for control over a British couple held hostage for more than a week, an Islamic militia commander and a local elder said Monday. The couple were not injured in the fighting.

Meanwhile, a U.S.-flagged cargo vessel with 21 Americans aboard came under gunfire from suspected Somali pirates but managed to escape, a U.S. Navy spokesman said.

Elders sent local fighters to thwart an attempt by some of the pirates holding the couple to take them to an extremist Islamic group, said a commander of a rival moderate Islamic militia who gave his name only as Ilka'ase.

"We did not want the pirates to use our territory to hold hostages or hand them over to another group. We took up arms with the help of (the moderate Islamic group) Ahlu Sunna Waljama and opposed" the other group, said Hussein Mohamed Kahiye, a clan elder in the central Somali village of Bahdo.

It was not possible to independently verify the reported fight over the British couple. The couple had been held on a ship at sea, but Kahiye said the couple were now in the coastal areas and traveling in two minibuses and an all-terrain vehicle.

A pirate claiming to speak on behalf of the group holding the British couple had said on Saturday that they want a $7 million ransom to release Paul and Rachel Chandler. The British government has said it would not pay a ransom.

The Chandlers were headed to Tanzania in their yacht, the Lynn Rival, when a distress signal was sent Oct. 23. The British navy found their empty yacht last Thursday, and the Chandlers have been in sporadic contact with the British media since.

The couple, who have been married for 28 years, took early retirement about three years ago and have spent several six-month spells at sea. Their voyages - which have taken them to the Greek islands, Egypt, Sudan, Eritrea, Oman, Yemen, India, the Maldives and the Seychelles - have been chronicled on a blog.

Also Monday, the MV Harriette was targeted by pirates aboard two skiffs about 360 nautical miles off Mombasa, Kenya, Lt. Nate Christensen said. The pirates - about six in each craft - came within 3 feet (a meter) of the cargo vessel but were unable to board, Christensen said from U.S. 5th Fleet headquarters in Bahrain.

No one on the U.S. ship was injured, he said, and no other details of the incident were available from the U.S. Navy, which is part of anti-piracy patrols off the Horn of Africa.

A security officer with Sealift Inc., the company that operates the MV Harriette, said the captain steered the ship to prevent the pirates getting on board and drew fire from the pirates.

The captain, "was able to turn away from the boat, he was able to maneuver to keep the small boats far away so that they could not get a ladder on the boat (MV Harriette)," John Belle told The Associated Press from the company's headquarters in Oyster Bay, N.Y.

"After they attempted to board and they were unsuccessful ... they did fire. No one was injured. Some of the rounds hit the lifeboat of the ship," Belle said. He said the attack ended within 25 minutes.

Belle said the Harriette has a 21-member crew who are all Americans. The ship had offloaded U.S. food aid at the Kenyan port of Mombasa, where it had been since Oct. 20. The Harriette had set sail for Mumbai, India on Sunday, Belle said.

The attack came a day after a Norwegian warship clashed with suspected Somali pirates, the European Union's anti-piracy force said.

A statement from the force said a team from Norwegian warship HNOMS Fridjof Nansen on Sunday went to talk to the crew of four fishing boats near Alula, a northeastern Somali coastal village known for piracy.

The crew on the first three boats cooperated but when the Norwegian team approached the fourth boat, shots were fired at them. The team fired in self-defense and retreated to avoid further violence, the statement said.

Alula village head Hareed Issa Omar claimed the Norwegian team fired first, killing a Somali and a Yemeni man - whom he said were fishermen and not pirates.

Norwegian military spokesman John Espen Lien said Monday that Norway was "not able to confirm or deny" allegations by local authorities that two men were killed.

The Horn of Africa nation does not have a navy or coast guard because it has not had an effective central government for 18 years. Warlords overthrew longtime dictator Mohamed Siad Barre in 1991. They then turned on each other, plunging Somalia into chaos and anarchy and creating the lawlessness that has allowed piracy to flourish off the country's coast.

A total of 306 attacks were reported between January and September, surpassing the 293 incidents recorded throughout 2008, according to a statement released by the International Maritime Bureau's piracy reporting center in Kuala Lumpur, Malaysia.

As a further example of Somalia's lawlessness, two Somali men tried and failed on Monday to hijack an airplane operated by Somali company Diallo Airlines, a company official said.

The attempted hijacking took place minutes after the Antonov plane carrying 30 passengers had taken off from the northeastern Somali port town of Bossaso, said Ahmed Yare, the marketing manager.

Yare said when the hijackers drew guns on the aircraft, passengers challenged them, confusing the hijackers and allowing the pilots to turn the plane back to Bossaso. On the ground, the hijackers tried to escape but police caught them after a brief gunbattle during which one hijacker was wounded. Neither the passengers were injured nor was the plane damaged, said Yare. It resumed its flight to neighboring Djibouti, Yare said.