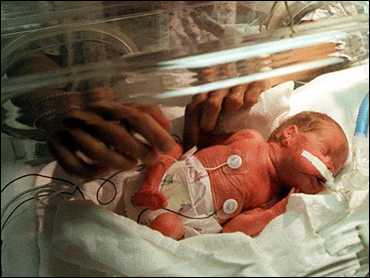 Women who take more than a year to get pregnant have a slightly higher than normal chance of giving birth prematurely, new research indicates.

The reasons for premature birth are a mystery in nearly half of cases, and experts say the research, published this week in the journal Human Reproduction, indicates fertility troubles could explain part of the problem.

Premature birth — when the baby is delivered before 37 weeks of pregnancy — is a major public health concern because underdeveloped babies are at increased risk of death in the first year of life and are more likely to develop heart, lung and brain disorders if they survive.

The causes are not well understood. Some pre-term births are caused by maternal or fetal stress, infections, high blood pressure, bleeding or stretching of the uterus. But in the rest, the reason is unknown.

The study is the largest ever conducted on infertility and birth outcomes.

Dr. Olga Basso of the University of Aarhus in Denmark and Dr. Donna Baird of the U.S. National Institute of Environmental Health Sciences analyzed nearly 56,000 singleton births in Denmark, where women had reported early in their pregnancies how long it took them to get pregnant.

About 11 percent of the women had to try for more than a year to get pregnant — the common definition of infertility — and about half of them eventually turned to fertility treatment.

Once the results were adjusted for factors that influence pre-term birth, including age, women who had trouble getting pregnant were about 40 percent more likely to give birth prematurely than those who conceived easily, the study found.

"The risks are still small to women who have had periods of infertility," noted Jean Golding, a professor of pediatric and perinatal epidemiology at Bristol University in England who was not connected with the study.

The more important contribution of the research, she said, is that it could help experts understand the factors that increase the risk of pre-term delivery.

However, Basso said that while the increased risk was small when all the women were counted together, she suspects a fraction of those women might have a much higher risk and further research may be able to tease that out.

Fertility treatment itself is often blamed for some premature births, but the study found pre-term births occurred about as often among women who eventually conceived naturally after trying for more than a year to get pregnant.

"Maybe it's not really the fertility treatment that does this, but it's something associated with the causes of the infertility," Basso said.

The study also found an increased chance of having a low birth weight baby and needing a Caesarean section among women who had trouble getting pregnant, but those links became much weaker once the mothers' age, obesity and smoking habits were taken into account.

At least one in 10 babies are born to couples who take longer than a year to conceive.