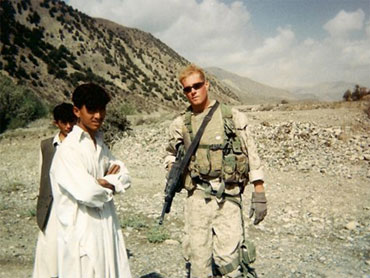 In his four years in the Marines Nick Stefanovic deployed on combat missions three times - twice to Afghanistan and once to Iraq. He survived when others didn't, including his best friend. It was a loss so grievous Nick could not find words for it.

Nick came back from war and lost his way in his old neighborhood. Rochester, NY didn't feel like home anymore. How could a guy who jumped at every loud noise fit in with the old crowd? How could he sleep when every time he drifted off there were nightmares? How could he find a way to be normal again?

One night one of Nick's friends offered a way: Oxycontin. The anxiety vanished; the nightmares went away. Nick's parents thought he was getting over his combat trauma, but he was actually becoming a full blown addict. It wasn't long before he was arrested and standing before a judge.

That was 10 months ago and since then, Nick's been putting his life back together. It has not been easy. He's determined to make it work -- he has a job, attends Bible study classes and helps coach high school basketball.

It's a steady road back and when CBS News came calling, asking him to tell his painful story, Nick's mother begged him to say no. The last thing Nick needed now, his mom said, was to add to the stress by going public with a story about drugs and trouble with the law. The last thing he needed was to sit down in front of a CBS News camera and talk to correspondent David Martin about his journey from United States Marine to accused felon.

But Nick Stefanovic wasn't just thinking of himself when he agreed to a risky interview about his problems. He went on national television to speak on behalf of other veterans who lived through the fighting only to succumb to demons afterwards. The experts call their bouts with booze and drugs "self-medicating" and that's probably a good way to call it.

What Nick Stefanovic did when he put his story out there for all to see is something I call courage -- moral courage. Most of us have never had to summon the physical courage that combat requires, but all of us can understand what it takes to open up a dark part of your life to public scrutiny.

As for mom, there wasn't a moment when we were with Nick that she wasn't right there watching us with an eagle eye. The judge gave Nick a second chance by offering him rehabilitation instead of prison, but Nick's mother gave him the strength to take that chance.