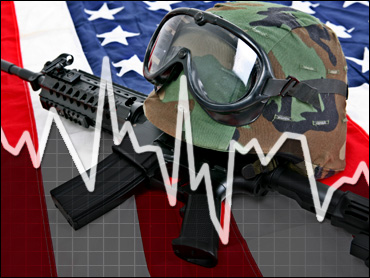 Spc. Carl McCoy survived two tours in Iraq only to take his own life - and shatter the life of his wife Maggie.

"He shot himself in the bathroom," she tells CBS News national security correspondent David Martin.

According to Maggie, Carl was drinking and their marriage was in trouble. He knew he needed help and scheduled an appointment with a mental health counselor at Fort Campbell, Ky. But that morning…

"They called and cancelled," Maggie recalls. "They didn't have anybody to see him. That was the day before he killed himself."

Maggie was also a soldier, a sergeant with two tours in Iraq. She planned to stay in the Army - until she saw an e-mail written by her commander after Carl's suicide.

That may sound callous, but it's the reality of life in an Army faced with the unrelenting pace of war and only beginning to come to grips with soldiers so stressed they're taking their own lives.

"We saw the numbers go up the last four years," says Gen. Pete Chiarelli, the Army's vice chief of staff. "We should have been more proactive, all of us, including me, in attacking this problem."

"I've been doing this stuff for 36 years and I have never run into anything as difficult as this," Chiarelli says.

Carl McCoy was one of 140 known or suspected suicides in the Army last year - an all-time high. This year the numbers are even worse - 54 in the first three months. Here's another alarming statistic: each day on average three soldiers call a national suicide hotline run by the Department of Health and Human Services.

That means each day there are three soldiers out there thinking of killing themselves but who are afraid to ask for help within the Army.

"It's the stigma," Chiarelli says. "It's the soldier who wants to reach out to someone who's not in his chain of command because he feels that somehow if he does do that he's going to be thought of as a lesser soldier."

Chiarelli says Fort Campbell has the most aggressive suicide prevention program in the Army, but that has not stopped what he calls a horrible spike - 11 suicides at this one base since the first of the year. The fact that these are some of the Army's toughest soldiers, members of the 101st Airborne Division, doesn't protect them from inner demons.

Lt Col. Tom Kunk is the first to be notified whenever a suicide occurs.

"The one common thread is relationship problems," Kunk says.

Problems which set in after the honeymoon of the homecoming is over. Kunk is nearly at wit's end trying to prevent the suicides.

But it hasn't. Last month every soldier was required to watch an interactive video on suicide prevention. Spc. Ken Attkisson watched it and the next day - in the middle of an argument with his wife - killed himself.