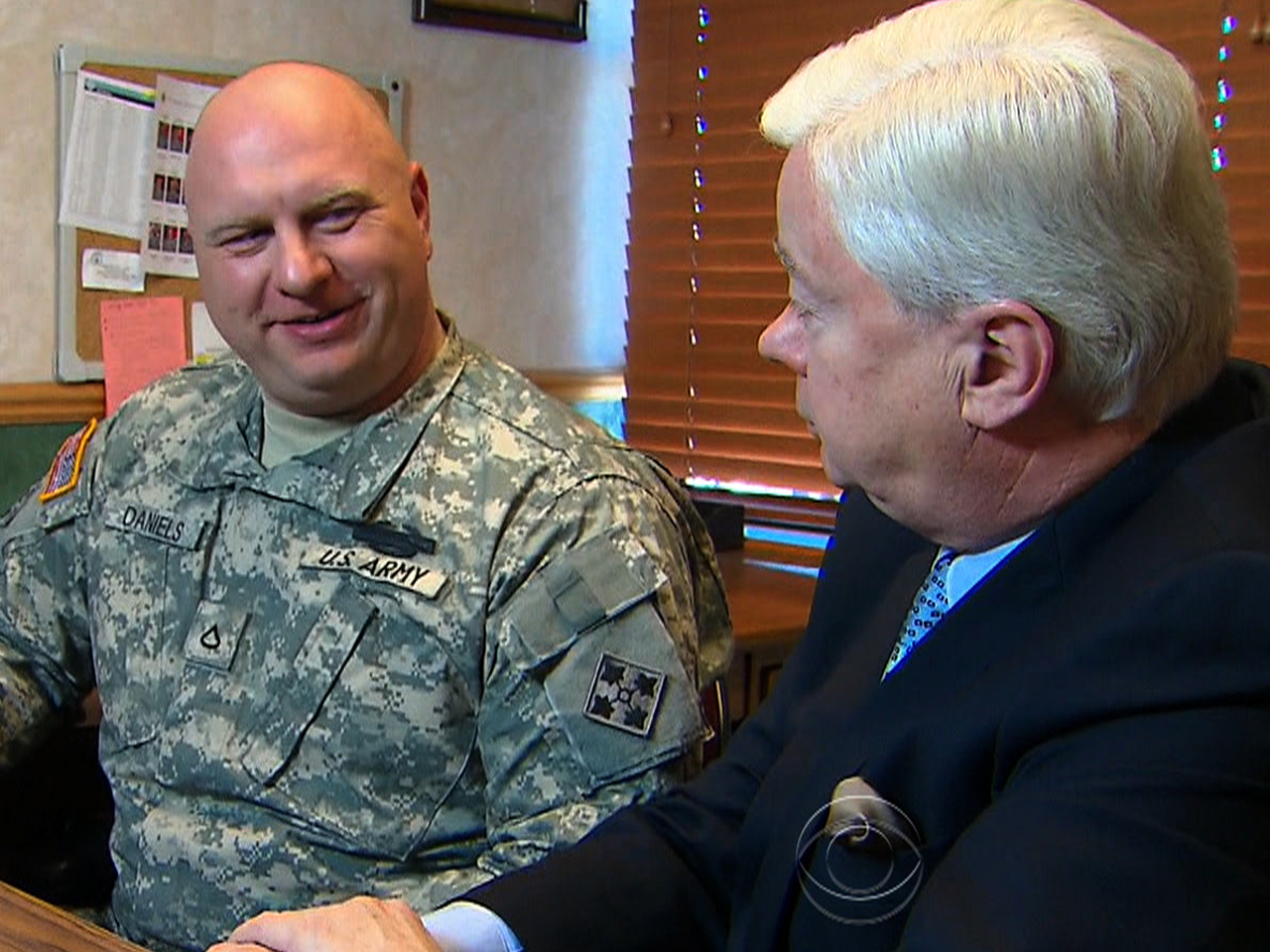 (CBS News) What does war look like from a soldier's point of view? Tens of millions of YouTube viewers now know, thanks to a video taken in Afghanistan that's gone viral.

CBS News spoke with the man who shot the helmet cam video -- and got shot himself in the process. The video has become one of the most viewed three minutes of war video ever, with 23 million hits on YouTube. It's video of a battle with Taliban forces in Afghanistan, as seen through the helmet camera of Pfc. Ted Daniels.

It started when he purposely moved into the open, drawing fire on himself to protect the seven men in his unit. Daniels told "CBS This Morning," "You know, tactically, it was not a sound thing to do. But I also remember Murphy's Laws of Combat. If it's stupid, but works, it isn't stupid."

Then a Taliban bullet hit part of his gun. It flew out of his hand. Daniels recalled, "It was almost like if you took an aluminum baseball bat and hit a metal pole with it. That's what my hand felt like. I was actually afraid at first to look down at my hand, wanted to make sure I still had all my fingers and everything else."

In the video, Daniels can be seen reaching for his rifle. Enemy bullets exploded on the rocks, sending fragments into his arm.

Daniels said he was later embarrassed for yelling that he was hit. He said, "That was a vulnerable moment for me right there. You know, I kind of pride myself on being a tough guy. Not once in my life have I ever cried out like that. Ever. ... I thought I was going to die."

His arms were peppered and bleeding, but he managed to get his rifle back, and by then, other men in the unit were also firing at the Taliban. There the video stops after his camera battery went dead. Then came a harrowing run down the hill to rejoin his unit when the bullets came even closer.

"A round had hit the corner of my eye protection," Daniels said. "They blew right off of my face. And I had another round skip off the side of my Kevlar helmet."

As to how the world got to see Daniels' video -- it was a mistake. He uploaded it to what he thought was a private channel on Youtube.

Another YouTube user, Funker530 who collects war videos, saw it and asked if he could post it as part of his documentary of combat footage. Daniels said yes. That's when the video went viral.

Daniels said, "I contacted him through Facebook. I found him on Facebook. And I said, 'Listen, could you please, can you just take this video down. It's gonna end up bringing a lot of heat on me. It's not something that I really want. Please remove it.' Never got a reply."

And the video is still out there. Asked if he made a mistake when he uploaded it, he replied, "Obviously, now I think I did."

Daniels said he violated no rules in taking the video. His commander did not specifically bar soldiers from making videos as other commanders have done. The Pentagon discourages the release of videos, in part so as not to give the Taliban any tactical information or propaganda tools. As for Daniels, the important thing was how the battle that day ended. Daniels said, "We made it. We made it, you know. We all made it out and we all made it to fight another day. It felt good."

Watch Barry Petersen's full report in the video above.