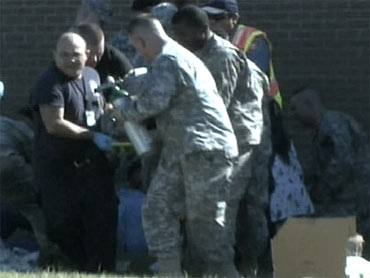 Authorities said immediately after the shootings that they had killed the suspected shooter, but later in the evening they recanted and said that he was alive and in stable condition at a hospital, watched by a guard.

Captain Isaac Taylor, a spokesman at Fort Hood, confirmed to CBS News early Friday morning that one additional victim had died of wounds sustained in the attack after hospitalization, raising the death toll to 13. At least 30 others were wounded, according to Taylor.

Haug said Hasan was in "stable but serious" condition at a nearby hospital, under guard by law enforcement authorities. Army officials, "don't believe he's in a condition to speak," added Haug.

The violence was believed to be the worst mass shooting in history at a U.S. military base.

The shooting began around 1:30 p.m., when shots were fired at the base's Soldier Readiness Center, where soldiers who are about to be deployed or who are returning undergo medical screening.

More coverage of the tragedy at Fort Hood:

Haug said Friday that the guns used in the attack were believed to be Hasan's "own private firearms".

Lt. Gen. Bob Cone, commander of Fort Hood, told CBS' "Early Show" there were reports that Hasan was saying, "Allahu Akbar," or "God is Great," as he shot people in a "calm and measured" manner.

Cone told "Early Show" co-anchor Harry Smith that the suspect was shot at least twice inside a building on the base, then he left the building to pursue his victims as they tried to flee, firing off more rounds.

In a statement released to the media Thursday night, Hasan's family said they were "shocked and saddened by the terrible events at Fort Hood."

The full statement from the unnamed cousin said: "Nidal was an American citizen. He was born in Arlington, Virginia and raised here in America. He attended local high schools and eventually went on to attend Virginia Tech. We are filled with grief for the families of today's victims. Our family loves America. We are proud of our country, and saddened by today's tragedy. Because this situation is still unfolding, we have nothing else that we are able to share with you at this time."

Faizul Khan, a former imam at a mosque Hasan attended in Silver Spring, Maryland, said he spoke often with Hasan about how Hasan wanted to find a wife. Hasan was a lifelong Muslim and attended prayers regularly, often in his Army uniform, Khan said.

Video from a convenience store that reportedly shows Hasan making a purchase just hours before the alleged attack shows him wearing a shalwar kameez, a traditional robe worn primarily in Afhganistan and Pakistan - but not in the Arab world where Hasan has his roots.

CBS News correspondent Sheila MacVicar reports that, possibly even more telling about the shop video, is that the man in the video is wearing all white, a color associated in Islam with death or mourning.

Hasan, 39, is a licensed psychiatrist who has lived in Bethesda and Silver Spring, Md. and various places in Virginia, where he grew up. A spokesman for Texas Sen. Hutchison said Hasan was upset about an upcoming deployment to Iraq.

The victims of the shooting have not been identified but Cone said Thursday night that the slain included U.S. soldiers and a civilian police officer working at the base. He said that no children had been killed to his knowledge.

"It's a terrible tragedy. It's stunning," Cone said. "Soldiers and family members and many of the great civilians that work here are absolutely devastated."

The wounded are dispersed among several central Texas hospitals and the extent of their injuries varied, Cone said.

President Obama, speaking before a scheduled event in Washington, said, "It's difficult enough when we lose these brave Americans in battles overseas. It is horrifying that they should come under fire at an Army base on American soil."

"I would ask all Americans to keep the men and women of Fort Hood in your thoughts and prayers. We will make sure that we get answers to every single question about this horrible incident," Obama said.

The Army post was locked down until at around 8:30 p.m. Thursday, but Cone said that all of the deaths and injuries had taken place during the initial 1:30 p.m. incident and that authorities were simply exercising and abundance of caution in lifting the lockdown.

FBI agents have responded to the base and the military is asking the FBI's help in investigating the backgrounds of the two soldiers held as suspects in the shooting, Cone said.

A law enforcement official says investigators are trying to determine if Hasan was his birth name, or if he changed his name and converted to Islam at some point in his life.

Military officials say Hasan worked at the Walter Reed Army Medical Center in Washington, D.C. for six years before being transferred to the Texas base in July. The officials had access to Hasan's military record. They said he received a poor performance evaluation while at Walter Reed.

He is a graduate of Virginia Tech University, where he was a member of the ROTC and earned a bachelor's degree in biochemistry in 1997. He received his medical degree from the military's Uniformed Services University of the Health Sciences in Bethesda, Md., in 2001. At Walter Reed, he did his internship, residency and a fellowship.

During the attack, terrified military families turned to Twitter to find out what was happening, reports CBS News correspondent David Martin.

One tweet read, "locked in my post housing, scared, don't know where the shooters are." Another: "haven't heard warning sirens in about 15 minutes, just waiting to get to my husband. And a third, capturing the shock brought on by today's attack: "i thought i was living in one of the safest places ever."

(AP/CBS/Army & Air Force ESRI)
There has been some confusion about the exact location of the shooting. Cone said that the shooting took place in the Readiness Center but that the two surviving suspects were taken into custody in an "adjacent facility."

At the Soldier Readiness Center, soldiers who are about to be deployed or who are returning undergo medical screening - on average about 300-400 screened a day, said Sgt. Rebekah Lampam, a spokeswoman at Fort Hood.

A graduation ceremony for soldiers who finished college courses while deployed was going on in an auditorium at the Readiness Center at the time of the shooting, said Lampam said.

Schanepp was at the ceremony when a soldier who had been shot in the back came running toward him and alerted him of the shooting, Stone said. The soldier told Schanepp not to go in the direction of the shooter, he said. Stone said he believes Schanepp was in the theater.

"I was here for a 2 p.m. graduation," Schannep, a retired Army colonel, opened fire at a counseling center on a U.S. military base in Iraq, killing five fellow soldiers. An investigation showed that that shooter had shown signs of mental problems for months.

Around the country, some bases stepped up security precautions, but no others were locked down.

A woman interviewed by CBS affiliate KWTX in Waco shortly after the shooting said that news of the shooting had reached her husband and other U.S. soldiers stationed in Iraq.

At 2 p.m. emergency responders en route to Fort Hood were told that their planned staging area, Soldier's Dome, was not safe to use, the Temple Daily Telegram reports.

Banks said it is too soon to tell whether there is any link to battle stress or repeated deployments. The Army is suffering a record high suicide rate and other signs of stress from fighting two wars.

In a statement, Hutchison said, "I am shocked and saddened by today's outburst of violence at Fort Hood that has cost seven of our brave service members their lives and has gravely injured others. My heart goes out to their loved ones. Our dedicated military personnel have sacrificed so much in service to our country, and it sickens me that the men and women of Fort Hood have been subjected to this senseless, random violence."

Covering 339 square miles, Fort Hood is the largest active duty armored post in the United States. Home to about 52,000 troops as of earlier this year, the sprawling base is located halfway between Austin and Waco.

The base is home to nine schools - seven elementary schools and two middle schools - and all were on lockdown, said Killeen school spokesman Todd Martin.

Texas Department of Public Safety spokeswoman Tela Mange said Texas Rangers and state troopers were en route to Fort Hood to help seal the perimeter of the 108,000 acre base.

Fort Hood officially opened on Sept. 18, 1942, and was named in honor of Gen. John Bell Hood. It has been continuously used for armored training and is charged with maintaining readiness for combat missions.