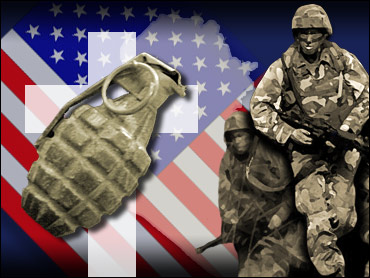 The Army waited until after the funerals of Capt. Phillip Esposito and Lt. Louis Allen before breaking the news that could only add to their families' pain. A fellow soldier – Staff Sgt. Alberto Martinez – has been charged with their murder, apparently in revenge for some disciplinary action taken against him, reports CBS News Correspondent David Martin.

All three served in the same National Guard unit.

When it happened last week, the Army first thought the two officers had been killed by enemy mortar or rocket fire, but an investigation turned up evidence Sgt. Martinez threw grenades into the room Esposito and Allen shared at one of Saddam Hussein's palaces in Tikrit.

The Army said in an announcement that Staff Sgt. Martinez, 37, a supply specialist with the Headquarters and Headquarters Company of the 42nd Infantry Division, was charged Wednesday in connection with the June 7 deaths of the two officers at Forward Operating Base Danger, 80 miles north of Baghdad.

"Martinez is charged with violation of Article 118 (Murder) with two specifications of premeditated murder," said a statement issued by the Multinational Task Force in Iraq.

It added that "Martinez is currently in pretrial confinement at a military confinement facility in Kuwait."

This is the second instance since the war began of what the military calls "fragging," soldiers killing their officers. If it keeps happening, fragging is an ominous sign of low morale and poor discipline, Martin reports.

The only other fragging occurred more than two years ago, as the 101st Airborne Division was getting ready to cross from Kuwait into Iraq. Sgt. Hasan Akbar used grenades and a rifle to kill two officers and wound 14 others. Akbar, a Muslim who had written his diary "Destroying America is my greatest goal," was convicted and sentenced to death.

The charge against Martinez "along with supporting evidence, will be forwarded through the appropriate chain of command for review and recommendations as to disposition. An attorney from the U.S. Army Trial Defense Service represents Martinez in this matter. He may also retain a civilian defense attorney to represent him at no cost to the government," the Army said.

"Staff Sgt. Martinez has been and will continue to be afforded the extensive rights under the Uniformed Code of Military Justice," said Col. Billy J. Buckner, spokesman for the Multi-National Corps.

There was no hometown available for Martinez.

The act of American troops killing their officers dates back to colonial times, but the problem escalated late in the Vietnam War.

Fragging entered the American lexicon in the Vietnam War. It is a reference to the use of fragmentation grenades, which are difficult to trace to a specific soldier.

Such incidents increased late in the 1960s as the strains grew on a draftee army waging an unpopular war. Young men feeling hassled or unnecessarily put in harm's way by their commanders settled their grievances with a fragmentation grenade or a bullet in the back.

Between 1969 and 1971, the Army reported 600 fragging incidents that killed 82 Americans and injured 651. In 1971 alone, there were 1.8 fraggings for every 1,000 American soldiers serving in Vietnam, not including gun and knife assaults.

As U.S. President Richard M. Nixon drew down American forces, troops felt they were fighting a lost cause they were unwilling to die for.

Allen was a father of four who was a science teacher at Tuxedo High School in Orange County, New York, and had been deployed to Iraq just a few weeks ago.

Allen was a native of Chester, New York, and served with the Army National Guard's 101st Cavalry Regiment out of Newburgh, New York. He was survived by his wife, Barbara, and four sons, ages 1 to 6.