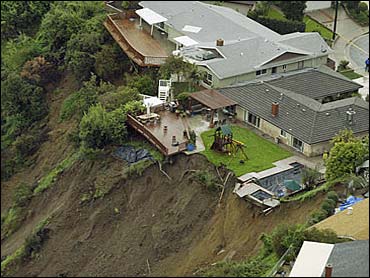 Drenched by almost three feet of rain since July, Los Angeles hasn't seen rain like this in more than a century.

The sun came out downtown Wednesday midday, but not before more than 90 homes were "red-tagged" and declared uninhabitable by authorities. Many were perched on the edges of saturated hillsides.

Other homes already had slipped and been destroyed in mudslides, while a surging river tore through an airport runway as the latest in a series of treacherous storms soaked Southern California.

CBS News Correspondent Sandra Hughes reports that more than 220 homes have been damaged or destroyed already this year. One resident, Leo Esparza, called 911 when he realized his sister's house was unsafe.

He said the homes are shifting slowly, due to the loose, rainwater-saturated soil.

"According to the city, they are (moving), I mean it's slowly moving the hill," Esparza said.

In Ventura County, officials closed the small Santa Paula airport Tuesday after more than 155 feet of runway collapsed into the rushing Santa Clara River. Chunks of concrete crumbled into the water throughout the day.

"We've lost nearly the entire west third of the airport," said Rowena Mason, president of the Santa Paula Airport Association. "This is millions and millions of dollars worth of damage."

More than 9 inches of rain has fallen in the past week, leaving nine people dead, including a man who was killed when a eucalyptus tree fell on his pickup truck Monday in San Diego County.

There were rescues across the state, including a woman who was pulled Tuesday from rushing, waist-high waters of the Rio Hondo River in Montebello. Mudslides forced officials to suspend train service north of Los Angeles to Santa Barbara at least through Thursday.

And more homes are on the brink, Hughes reports. A teetering boulder threatens to crush beachfront homes, such as that of Adrianne Harrop, in Malibu.

"I lost my house in '93 in the Los Flores fires and I don't want to lose another house," Harrop said.

Earlier in the week, mud and boulders crashed into an apartment bedroom, crushing a 16-year-old girl as she did her homework. A 61-year-old man was killed in a separate landslide.

The end of the rain doesn't mean an end to the danger, officials warned.

"Even when the rain stops, this saturated ground and all the hillsides could continue to move for many days thereafter," Los Angeles Mayor James Hahn said.

Mark Lacanilao got little more than an hour to pack up his belongings and vacate his Highland Park home.

His home, on a hillside north of downtown Los Angeles, is cracked right down the middle of its foundation.

"The soil that's underneath is eroding away, it has nothing to sit on," Lacanilao said.

For downtown Los Angeles, the total rainfall from the storms that have battered the state since last week reached 9.14 inches Wednesday morning.

That brings the amount since July 1, when California begins its yearly rainfall measurements, to 34.36 inches. The record for the entire year, 38.18 inches, was set in 1883-1884. The yearly average is about 15 inches.

Storms have caused $52.5 million in damage to Los Angeles County roads and facilities since the beginning of the year. The county has spent $9 million on repairs, including $500,000 since the weekend, officials said.

Hahn has asked Gov. Arnold Schwarzenegger to urge President Bush to issue a federal disaster declaration for the city, which could open the way for federal assistance. The mayor said damage exceeded $10 million and at least 96 homes are uninhabitable. Los Angeles County has suffered another $52 million in damage to its roads and facilities.