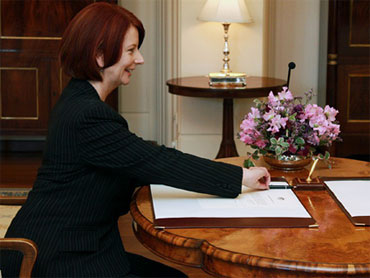 Lawyer Jennifer Massey may have proved too feisty in her bare-knuckled fight to be on Donald Trump's payroll.

Trump instead chose software executive Kelly Perdew, 37, to join his staff during the season finale of "The Apprentice" on Thursday.

Massey, 30, a Princeton and Harvard Law School graduate, attacked like a pit bull in the boardroom, even accusing Perdew of behind-the-scenes backstabbing. Her confrontational style eventually turned off Trump.

"Your teammates did not really like you too much and you did lose too much," Trump said in "firing" Massey.

It probably didn't help that she didn't escort Trump to a VIP reception during the reality show's final challenge. Instead, he walked to a helicopter and flew off.

Perdew was given the choice of a job in Las Vegas or New York, and chose to help Trump on his massive development on Manhattan's West Side.

He won after the two candidates were put through one last nerve-jangling competition: seeing who could manage a charity event more efficiently. Massey organized a basketball game involving NBA stars, while Perdew ran a polo match in leafy Connecticut.

Perdew had to referee squabbling assistants, decide where to paint a corporate logo on the grass and also learned a lesson about the care and feeding of Trump: his boss complained his seat at the polo match was dirty.

Massey landed NBA Commissioner David Stern to emcee her charity event and quickly produced a generator when the power blew backstage from too much video game playing.

But her brashness turned off many in the game show's audience, who overwhelmingly urged Trump to pick Perdew.

"She's getting thrown under the bus here," one of Massey's supporters said after a succession of people interviewed backed Perdew.

NBC did its best to make the finale a big event, renting out a theater in Lincoln Center, bringing Regis Philbin on to host and having the O'Jays perform the show's theme song, "For the Love of Money."

"The Apprentice" isn't nearly the hit it was last spring. The show averages just under 16 million viewers, down 19 percent from the 19.6 million it averaged going into the first season's finale, according to Nielsen Media Research.

And NBC will be hard-pressed to duplicate the audience of 28 million people who watched Rancic's hire. The network notes that "The Apprentice" has been hurt by the loss of "Friends" on Thursday night, but that it's still a top ten show among young people.

Since it was a game about corporate wiles, NBC wasn't afraid to do a little business itself: the network advertised talking Trump bobblehead dolls for sale, and stationed boxer Sugar Ray Leonard in the audience to tout "The Contender," producer Mark Burnett's next series on NBC.