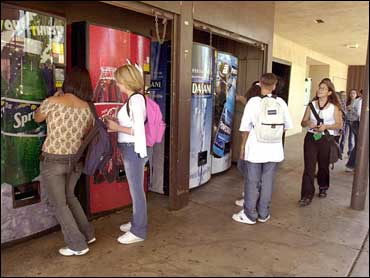 Health concerns have prompted school officials in Los Angeles County to vote to phase out the sale of soda pop and sugar-laden soft drinks to its 748,0000 students.

In voting unanimously to end the sale of soda in vending machines and cafeterias by January of 2004, the Los Angeles School Board rejected arguments that its 677 campuses need the money they make from the drinks, saying that students' health should take precedence over fund raising.

But they also voted for a compromise measure that would allow for the superintendent of schools to address the issue of lost revenue in a report to be filed six months from now.

"I find it appalling that we are discussing economics at the risk of our children's health," said board member Marlene Canter, who sponsored the measure. She argued that schools should not rely on students to subsidize their own educations.

The school district already prohibits carbonated drink sales at elementary schools. The new measure extends the ban to the district's approximately 200 middle and high schools. It only takes effect during school hours.

Still permitted during school hours are water, milk, beverages with at least 50 percent fruit juice and sports drinks with less than 42 grams of sugar per 20-ounce serving.

The meeting was held in the auditorium of the Downtown Magnet High School, where four vending machines offered jumbo-sized bottles of Coke, Sprite and Dr. Pepper for $1 each.

The decision in Los Angeles - one of the largest in the country, second only to New York City - is being closely watched by educators and activists across the country amid studies that show the percentage of American adolescents who are overweight has nearly tripled in the past 20 years. The trend has been blamed on junk food and lack of exercise.

School officials elsewhere have considered similar bans on soda pop sales but so far only a few - including the Oakland Unified School District in northern California - have put them in place. The state of Texas bans the sale of all junk food on its school campuses during lunchtime.

The new policy in Los Angeles will phase out soft drinks in vending machines and cafeterias, where they will be replaced by water, milk and fruit and sports drinks.

Critics of the soda ban argue that sugar-laden drinks are only part of a larger health and junk food problem and some Los Angeles school administrators predicted that they will have trouble paying for such things as dances and band uniforms.

"This is a little more about hype than solving the problem of childhood obesity," board member Mike Lansing said.

In California, an estimated 30 percent of children are overweight or at risk of being overweight, according to the California Center for Public Health Advocacy.

A study last year by Massachusetts researchers concluded that drinking sugar-sweetened soft drinks increases the chance of childhood obesity. Some other studies have failed to find any link.

Sean McBride, a spokesman for the National Soft Drink Association, a Washington, D.C.-based industry group, said that sodas were being unfairly blamed for childhood obesity, which has a number of causes.

"Physical education and physical activity are by far, more important in combating obesity than banning soft drinks from students' diets," said McBride. "In the end, this is really about the couch and not the can."

Others argue that school officials are focusing on student diets while education suffers, and that officials should leave the issue of the childrens' diets to their parents.

Canter, who sponsored the ban, said that students should not be made to pay for school activities by buying soda and pointed out that students who take in large amounts of sugar can have trouble concentrating in class.

Many Los Angeles Unified schools rely on soda sales to fund student activities such as sports and field trips. Sodas sold in vending machines and student stores generate an annual average profit of $39,000 per high school and $14,000 per middle school.

Bob Phillips, a spokesman for Coca-Cola Bottling of Southern California, said his company plans to abide by the school board's decision. He hinted that some of the school projects that the company underwrites may be threatened.

"We will see how the decision impacts on our relationship with local schools. There may need to be some revisions," he said.