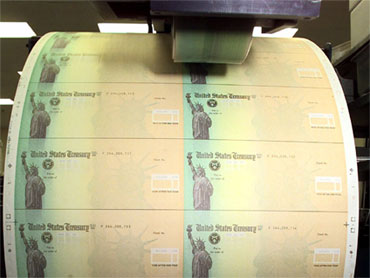 The retirement nest egg of an entire generation is stashed away in this small town along the Ohio River: $2.5 trillion in IOUs from the federal government, payable to the Social Security Administration.

It's time to start cashing them in.

For more than two decades, Social Security collected more money in payroll taxes than it paid out in benefits - billions more each year.

Not anymore. This year, for the first time since the 1980s, when Congress last overhauled Social Security, the retirement program is projected to pay out more in benefits than it collects in taxes - nearly $29 billion more.

Sounds like a good time to start tapping the nest egg. Too bad the federal government already spent that money over the years on other programs, preferring to borrow from Social Security rather than foreign creditors. In return, the Treasury Department issued a stack of IOUs - in the form of Treasury bonds - which are kept in a nondescript office building just down the street from Parkersburg's municipal offices.

Now the government will have to borrow even more money, much of it abroad, to start paying back the IOUs, and the timing couldn't be worse. The government is projected to post a record $1.5 trillion budget deficit this year, followed by trillion dollar deficits for years to come.

Social Security's shortfall will not affect current benefits. As long as the IOUs last, benefits will keep flowing. But experts say it is a warning sign that the program's finances are deteriorating. Social Security is projected to drain its trust funds by 2037 unless Congress acts, and there's concern that the looming crisis will lead to reduced benefits.

"This is not just a wake-up call, this is it. We're here," said Mary Johnson, a policy analyst with The Senior Citizens League, an advocacy group. "We are not going to be able to put it off any more."

For more than two decades, regardless of which political party was in power, Congress has been accused of raiding the Social Security trust funds to pay for other programs, masking the size of the budget deficit.

Remember Al Gore's "lockbox," the one he was going to use to protect Social Security? The former vice president talked about it so much during the 2000 presidential campaign that he was parodied on "Saturday Night Live."

Gore lost the election and never got his lockbox. But to illustrate the government's commitment to repaying Social Security, the Treasury Department has been issuing special bonds that earn interest for the retirement program. The bonds are unique because they are actually printed on paper, while other government bonds exist only in electronic form.

They are stored in a three-ring binder, locked in the bottom drawer of a white metal filing cabinet in the Parkersburg offices of Bureau of Public Debt. The agency, which is part of the Treasury Department, opened offices in Parkersburg in the 1950s as part of a plan to locate important government functions away from Washington, D.C., in case of an attack during the Cold War.

One bond is worth a little more than $15.1 billion and another is valued at just under $10.7 billion. In all, the agency has about $2.5 trillion in bonds, all backed by the full faith and credit of the U.S. government. But don't bother trying to steal them; they're nonnegotiable, which means they are worthless on the open market.

More than 52 million people receive old age or disability benefits from Social Security. The average benefit for retirees is a little under $1,200 a month. Disabled workers get an average of $1,100 a month.

Social Security is financed by payroll taxes - employers and employees must each pay a 6.2 percent tax on workers' earnings up to $106,800. Retirees can start getting early, reduced benefits at age 62. They get full benefits if they wait until they turn 66. Those born after 1960 will have to wait until they turn 67.

Social Security's financial problems have been looming for years as the nation's 78 million baby boomers approached retirement age. The oldest are already there. As that huge group of people starts collecting benefits - and stops paying payroll taxes - Social Security's trust funds will shrink, running out of money by 2037, according to the latest projection from the trustees who oversee the program.

The recession is making things worse, at least in the short term. Tax receipts are down from the loss of more than 8 million jobs, and applications for early retirement benefits have spiked from older workers who were laid off and forced to retire.

Stephen C. Goss, chief actuary for the Social Security Administration, says the crisis has been years in the making. "If this helps get people to look more seriously at that in the nearer term, that's probably a good thing. But it's only really a punctuation mark on the fact that we have longer-term financial issues that need to be addressed."

In the short term, the nonpartisan Congressional Budget Office projects that Social Security will continue to pay out more in benefits than it collects in taxes for the next three years. It is projected to post small surpluses of $6 billion each in 2014 and 2015, before returning to indefinite deficits in 2016.

For the budget year that ends in September, Social Security is projected to collect $677 billion in taxes and spend $706 billion on benefits and expenses.

Social Security will also collect about $120 billion in interest on the trust funds, according to the CBO projections, meaning its overall balance sheet will continue to grow. The interest, however, is paid by the government, adding even more to the budget deficit.

While Congress must shore up the program, action is unlikely this year, said Rep. Earl Pomeroy, D-N.D., who just took over last week as chairman of the House subcommittee that oversees Social Security.

"The issues required to address the long-term solvency needs of Social Security can be done in a careful, thoughtful and orderly way and they don't need to be done in the next few months," Pomeroy said.

The national debt - the amount of money the government owes its creditors - is about $12.5 trillion, or nearly $42,000 for every man, woman and child in the country. About $8 trillion has been borrowed in public debt markets, much of it from foreign creditors. The rest came from various government trust funds, including retirement funds for civil servants and the military. About $2.5 trillion is owed to Social Security.

Good luck to the politician who reneges on that debt, said Barbara Kennelly, a former Democratic congresswoman from Connecticut who is now president of the National Committee to Preserve Social Security and Medicare.

"Those bonds are protected by the full faith and credit of the United States of America," Kennelly said. "They're as solid as what we owe China and Japan."